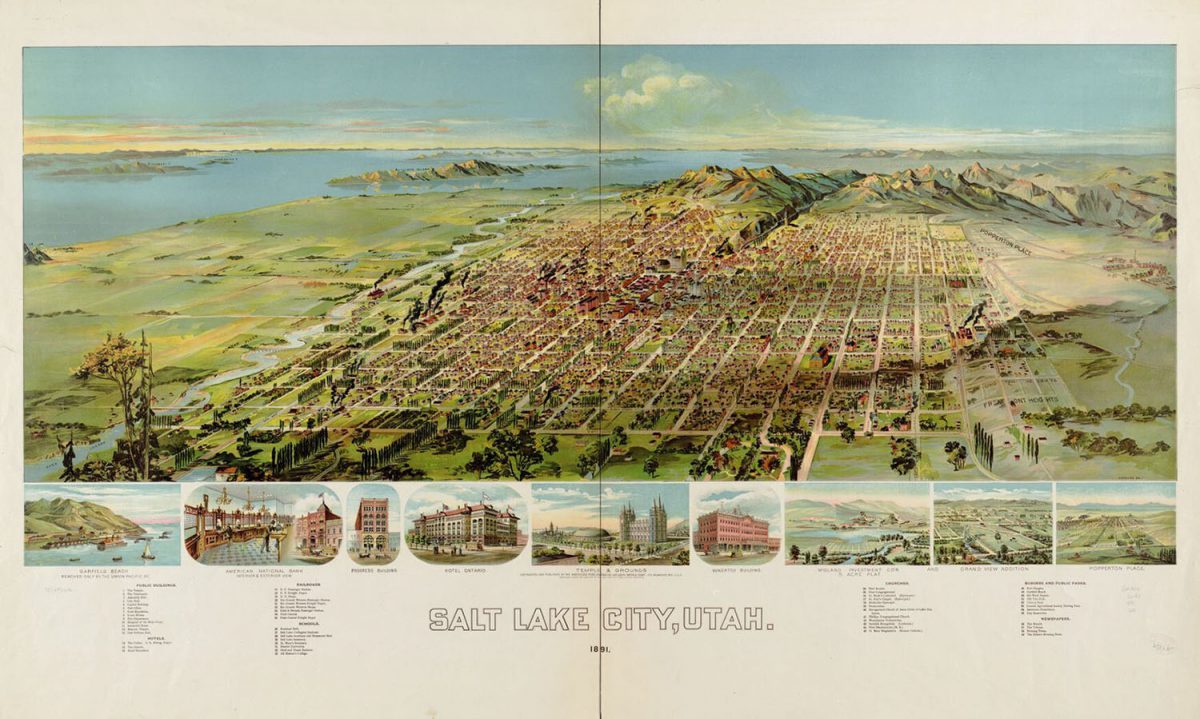 Historical themes allow us to understand the past by drawing connections to larger events and historical contexts.  Braided together in this serial history are eight reccurring themes. We define them here.

One theme that is evident throughout the series is “homeland.” Throughout Utah’s history, many people have considered the Salt Lake Valley their homeland. Native Americans considered the Great Basin their homeland dating back thousands of years. The Salt Lake Valley is still home to Utah’s American Indian peoples today. During the 1520s, Spain conquered the Aztec Empire. As a result, northern Utah became a northern outpost of the Spanish Empire. When Mexico gained its independence from Spain in 1821, the Salt Lake Valley became part of Mexican territory. All of these people identified the region as a homeland long before Mormon migrants and other immigrants from from around the world chose to settle in the area. Tens of thousands of migrants, immigrants, and even a few extended stay tourists have settled in and speak of this area as “home.”

Another theme is “residence and/or a starting point.” The west side served as the first residence or starting point for the beleaguered Utah Mormon pioneers who immigrated to the Salt Lake Valley in Mexican territory in 1847. By 1850, almost all of the members of the LDS church had journeyed to Utah en masse to live along the Wasatch Front.  Not long after the arrival of Mormons, other immigrants traveled to the Salt Lake Valley seeking economic opportunities. Many nineteenth- and twentieth-century immigrants first lived and worked in the Pioneer Park neighborhood before moving to other parts of Utah or the American West.

“Railroads is another theme that runs continuously through this serial history. Railroads brought an industry with an enduring presence to the neighborhood and to Utah.  Not only did railroads improve transportation, but they also provided job opportunities and expanded industrial output in Salt Lake’s west side. In short, the arrival of the railroads was transformative for the people, culture, and the environment of the Salt Lake Valley.

Salt Lake’s west side has also been a “contested space.” Historically Pioneer Park was a contested space as different groups competed for political, social, cultural, and economic control of the park and its surrounding area.

Another prevalent theme is that of “long-standing relationships,” which were at times personal and cultural, as well economic and industrial. Pioneer Park neighborhood had a relationship with Salt Lake City, the State of Utah and beyond. Railroads, industries, warehouses, tenements, and a constant stream of immigrants forged an interconnection with dozens of Salt Lake industries and with dozens of industrial cities and towns across Utah. Many immigrants arrived here first, stayed, or moved on to a network of Utah industrial cities and towns.

West side industries attracted immigrants seeking employment—which often manifested in low wage labor—and joined other people in the neighborhood who shared their language and customs. Still, others arrived to join sponsoring family members or fellow villagers who preceded them. The west side offered hundreds of low paying jobs, all in walking distance from boarding houses, tenements, extended stay hotels and private residences. Immigrants, African Americans, and people of color congregated in the Pioneer Park neighborhood because it was generally the only place they were allowed to live. Discriminative practices and city ordinances pushed immigrants of color between and around the railroad stations. The Pioneer Park neighborhood and the history of Salt Lake City tell a story of dominant forces restricting the physical movement of minorities seeking a better life for themselves and/or their families.

Pioneer Park has also always been a “transient neighborhood.” Since 1847, Pioneer Park and the surrounding neighborhood has been historically a transient neighborhood. Originally, Mormon immigrants built a temporary fort located in the Pioneer Park area. Their plans for the future city, however, placed center of the Salt Lake City to the east of the fort at what is now Temple Square. Pioneer Park, therefore, was only a temporary resting place for the first Mormon settlers who migrated to the Salt Lake Valley. Since 1847, individuals and groups, just like the initial Mormon pioneers, have moved in and out of the west side, making the area in a steady state of transition.

More recently, the west side has experienced change due to “post-industrial” transitions. These changes include housing and services for the homeless and indigent populations and the area’s gradual redevelopment as an urban workplace and residence for Salt Lake City’s growing creative and technological communities and economy.

Where Does the Past Go? All these factors have combined to create a neighborhood that was and is a very different place than the rest of Salt Lake City. As you read through this blog we hope that you will walk away with new information and find entertainment in its stories, images, and maps. Perhaps more importantly we hope that you gain a different understanding of William Faulkner’s statement, “The past is never dead. It’s not even past.” We also hope this serial history will offer context and background for all who live and work in Salt Lake City. We believe that Salt Lake’s West Side Stories can inform community members, government officials, business leaders, developers, and all others who are considering what is next for this unique and diverse neighborhood.

We believe that Salt Lake’s West Side Stories can inform community members, government officials, business leaders, developers, and all others who are considering what is next for this unique and diverse neighborhood.

In our next installment of Salt Lake’s West Side Stories, we will discuss the region’s long history by considering the neighborhood’s original ancient peoples and American Indian inhabitants.

Contributors: Over the course of meetings of the Pioneer Park Coalition History Committee in 2018 and 2019 most of these themes were raised and discussed. A special thanks to Lisa Nelson and the narrators at the Utah State Library’s Reading for the Blind Program for creating the audio for this post.