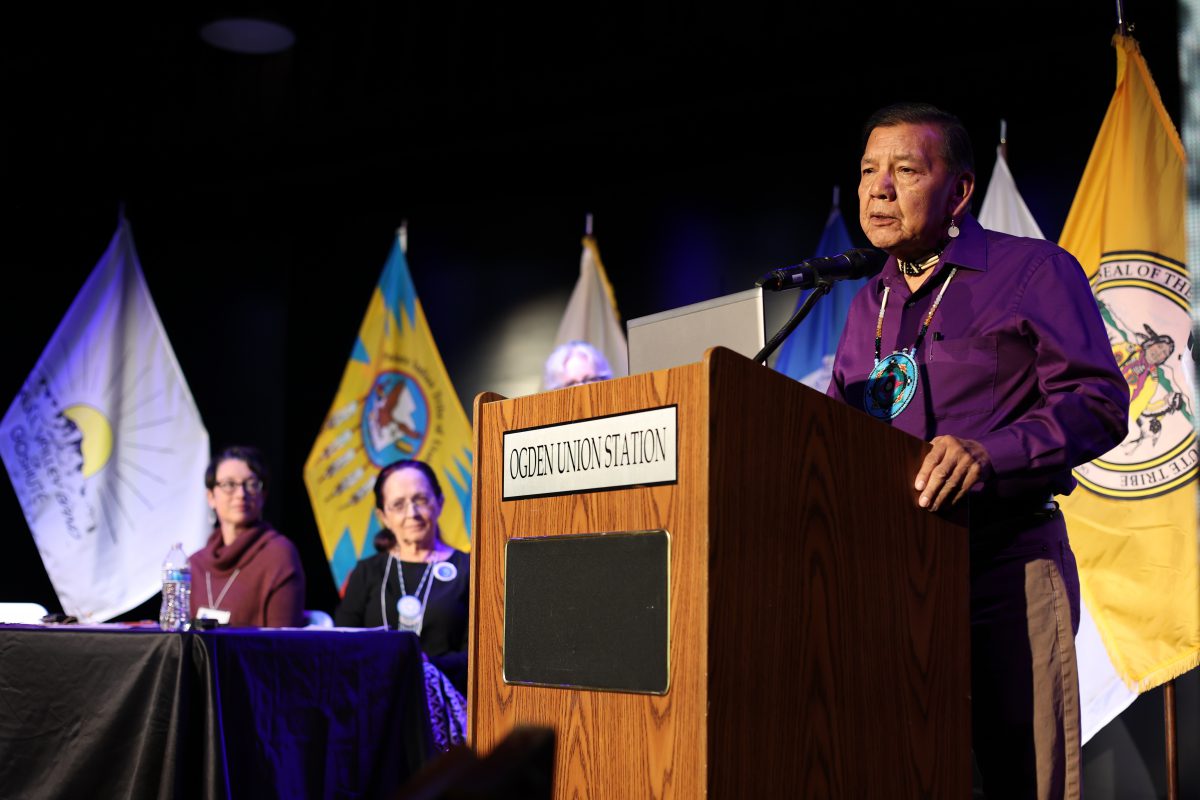 Living on the Uintah & Ouray Ute Reservation, Larry Cessppoch said he’s used to the quiet. In Ogden to attend the Railroads in Native American Gathering, the sound of a train whistle woke him up.

“That must of been how it was for our Ute people when they had no knowledge of what was coming with this train and to hear that sound and to feel that rumble,” he said.

Cesspooch, a Ute storyteller, photographer and filmmaker, reflected on how the Ute word for train translates as “big rumble.” The interactions between his ancestors and the railroad led to the assimilation of his Tribe, he said, as trains transported cattle and other goods and eventually led to the establishment of American schools.

Cesspooch spoke at the three-day public history Gathering, hosted on May 19-21, 2022 by Utah’s eight Tribal nations. The Gathering, planned by a Native-led steering committee, was sponsored by Ogden’s Union Station, the Utah Division of Indian Affairs, and the Utah Department of Cultural & Community Engagement.

The location of the event, significant in commemorating the completion of the Transcontinental Railroad, occupies ancestral land of the Northwestern Band of the Shoshone Nation. To open the Gathering, Shoshone guides led a field trip through northern Utah and southern Idaho, including a stop at the site of the Bear River Massacre.

In 1863, United States Army troops ambushed the Northwestern Band of Shoshone, killing more than 400 people, the largest murder of Native Americans in the country. Now Shoshone leaders are working to create the Boa Ogoi Cultural Interpretive Center on the site, with plans to restore the area’s ecology and habitat to that known by their ancestors in the 1860s.

At the Gathering, presentations by Tribal leaders, historians, and students explored the often overlooked historical and contemporary impacts of railroad expansion. The completion of the Transcontinental Railroad in 1869 was a significant engineering achievement that transformed America. “But it came at a devastating cost” to Indigenous cultures and communities, said Darren Parry, an educator and elder of the Northwestern Band of the Shoshone Nation, in a keynote address to open the Gathering.

“I am always confused as to why history is broken up into prehistory and history,” said another presenter, Franci Lynne Taylor, Choctaw, a consultant and former director of the University of Utah’s American Indian Resource Center. “It shows why we’re here today, is to give voice to the other side of the story.”

In a Friday keynote address, Yvette Towersap, a policy analyst with the Shoshone-Bannock Tribes, discussed her study of historical documents recording negotiations between railroad officials and Tribal elders of Idaho’s Fort Hall Indian Reservation. Some discussions weren’t accurately translated, while others were purposefully mistranslated. Most treaties were later ignored or broken by railroad companies, she said. “Railroad rights of way were a major intrusion on Tribal land ownership,” Towersap said. “It basically cut the reservation in half.”

In another session, Principal Man Ian Zabarte, of the Western Bands of the Shoshone Nation, presented the devastating impact and effect of nuclear toxic waste and contamination on his people. “We need a safe place to live and we need to be protected so we can grow and develop as every other American does,” he said. “We need equal protection under the law.”

In addition to historians and students, the Gathering included presentations from artists and musicians, and displays by Native vendors, who laid out rows of delicately handcrafted jewelry and crafts.

In the past, America’s history has been written as a single narrative of nation building, while the stories that didn’t fit into that master narrative were sidelined or ignored, Parry said. He underscored a point that Native presenters would return to again and again: We’re here. We’re present now. We’ll always be here.

“Native Americans must be included as a central strand in the history of this great country,” Parry said. “After all, the nation was built on Indigenous land.”

Jessica Nichole Begay is a recent graduate of the University of Utah. She is a member of the Navajo Nation, born and raised in Gallup, NM. Additional reporting by Ellen Fagg Weist.