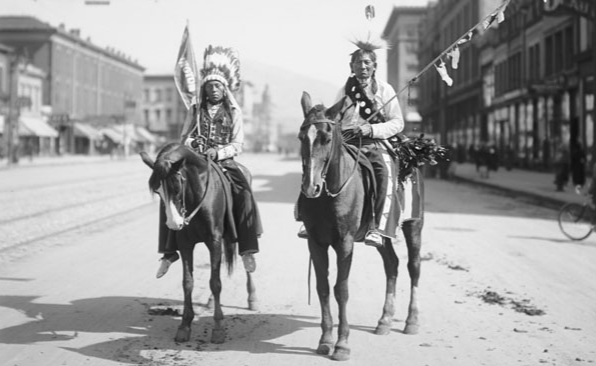 Date: June 27, 2022 (Season 4, Episode 14: 59 minutes & 21 seconds long). Click Here for the BuzzSprout version of this Speak Your Piece episode. Are you interested in other episodes of Speak Your Piece? Click Here. The above photo is of two Plains Indians, part of an “Old West Show” performance group at the 1911 Utah State Fair Grounds in SLC. The photo was taken by Shipler Commercial Photographers and is used with permission from the Utah State Historical Society. A discussion on the “mythologizing” of the American West, including visual tropes like this one, are discussed briefly in this episode. The episode was coproduced by Brad Westwood and Chelsey Zamir, with help (sound engineering and post-production editing) from Jason Powers from the Utah State Library Recording Studio.

Dr. Gregory E. Smoak, longtime director of the American West Center (Univ. of Utah) and associate professor of history, discusses with SYP host Brad Westwood his 2021 book entitled, “Western Lands, Western Voices: Essays on Public History in the American West,” (The University of Utah Press). Smoak describes the U of U American West Center, and its 50 plus years of public facing history work. Smoak also defines, in this series of essays, what makes up “Public History.”

Yes, it is “history” that strives to be relevant and useful in the public sphere, and it is typically history beyond an academic setting. It also includes policy advisors to government, historic site interpreters and managers, oral historians, museum professionals, government historians (like co-producers Chelsey Zamir and Brad Westwood), historic preservationists, private history consultants, archivists, film and media producers, and more. Smoak’s selection of essays clarifies, inspires, and offers a “state of the field” set of examples. This is engaging reading (and listening) for both specialists and lovers of Western and Utah history (especially those interested in the “back of house” in regard to history).

The essays explore the American West and the academic or formal interpretation of it. The book is a wonderful collection of defensible and peer-reviewed writing on public history, the book kicks off with Stanford University historian Richard White’s essay, where he argues that public historians allow the community/client to ask essential questions, and then the public historians take these questions and using rigorous methodology, research, thinking about causation and context, and interprets the past in a meaningful way, in an effort to answering these questions.

Other essays discuss being a public intellectual and informing discourse over controversial topics, analysis of the role of western public history, and discussion of the interpretation of the west and mythology (the west, for many, is defined by mythological visions of the “frontier,” as seen in Western genre films). Other essays explore administrative history of the national parks and the academic and public divide. At the core of the collection, Smoak notes, is native peoples’ history, with essays thereafter reflecting the diverse communities within the American West.

Sometimes, public history is wrongly conflated with “popular history,” often reducing it to a matter of audience, and associating it with a “lesser” type of history. The essays address questions and ideas via collaboration with many historians’ contributions to the collection. Smoak notes, “it’s not the process that’s different, it’s the product.” The “product,” as Smoak puts it, privileges the event and the locality and allows for the community to see themselves in the product more fully. The same events may be critical to somebody writing a larger academic history, but “it’s used as evidence, as case studies – it’s like a 30,000-foot view.” Smoak hopes his book will instill in his colleagues, in universities, and in institutions, an understanding of how important public history work is for communities. This book, Smoak hopes, will educate the public on what public history really is, with a regional focus, in hopes of inspiring a positive effect on communities.

Smoak and Westwood conclude their discussion by addressing “Utah studies” and the future of it. The idea of Utah studies will change as rapidly as the state has been changing, Smoak says. Therefore, nailing down the key components of Utah history will be key: beginning with native peoples and addressing how they shaped the landscape, interpretation of their continued lives within the state, and interactions with colonizers; followed by the history of Mormon settlers and inclusion of how the Mormon cultural region expands beyond Utah’s borders, which has a lot of implications for social relationships as well as the physical landscape.

Utah studies would also benefit from including discussion of this tension between the inside and outside of the state. Smoak notes that often Utah history becomes insular and keeps the outside world at bay but, he continues, Utah is not unique. It is impacted by all of these other themes, and we have to engage Utah studies on a national and regional level. The context is much broader than just within the Salt Lake Valley and within the current political boundaries of Utah.

The History of the American West Center and Oral History

What is the American West Center? It’s one of the oldest regional studies centers in the country, located on the University of Utah campus, in the pursuit of western history. It was founded in 1964 as the Western History Center, within the history department at the University of Utah, founded by two history professors Russ Mortensen and C. Gregory Crampton as a partnership with the Western History Association, to produce a second journal/magazine on the American West. That endeavor only lasted for a couple of years, which left the American West Center (hereafter AWC) needing a solid reason for existing which was filled by the tobacco industry heiress, Doris Duke, who in 1967, gave sizable financial grants to several universities, including the AWC, to conduct hundreds of oral histories with Native Americans across the Intermountain West.

The AWC became the manager of this massive Western oral history undertaking – several universities would conduct Native American oral histories of nearby tribes and send the recordings to the AWC to be transcribed, indexed and eventually digitized. The AWC’s oral history collection is truly immense, the public can find the oral histories listed here. Today, the AWC focuses on oral history projects; provides research assistantship positions to students during their masters and doctoral studies; and conducts contracted research projects related to Native American treaties, environmental, architectural and water rights history, just to name a few.

Oral histories, Smoak adds, is a documentation of lived history, it is the oldest form of history dating back to the beginning of humankind. However, as evidential source material, it became suspect in the mid-19th century in the wake of professionalized history and, in particular, scientific history and with written documents, as the privileged source materials. This, in turn, excluded other types of historical sources and silenced many, as certain groups of people didn’t leave documents recording their history, or family’s history, to research libraries, nor have the ability or time to document such history. Smoak continues, in terms of dealing with native peoples’ histories, oral histories are essential – until the 20th century, most native peoples did not keep written documents at all, and thus, without oral histories, this would have silenced their stories. The AWC, and Dr. Smoak’s work in particular, focuses on many projects with native peoples, including water rights, treaty rights issues, and thus, Smoak states, oral histories are integral to those types of projects and research.

Oral histories have been the core methodology for the AWC, along with projects for native peoples, land management agencies, and veterans. Much of the work completed by the AWC is available to the public via the Marriott Library, Special Collections Department at the University of Utah. The late beloved Dr. Floyd O’Neil, former director of the AWC 1966-1977, came to the AWC to work on the Doris Duke project in the mid-1960s. Having been long associated with native peoples and raised on the Ute Reservation in Fort Duchesne, O’Neil sought out many native peoples-focused projects for the AWC, with oral histories at core of that. O’Neil didn’t just bring a focus of native peoples’ projects to the AWC, he also brought a number of influential historians and scholars to the AWC, including Drs. Gregory Thompson (associate dean of the Marriott Library Special Collections department at the University of Utah) and Richard Hart (social historian). Other influential figures within the field of history and former directors of the AWC were Drs. Daniel McCool (professor emeritus in political science and important figure in Utah and western policy) from 1999-2006, a scholar dedicated to native sovereignty and who launched a project for veterans’ oral histories; as well as Matthew Basso (current associate professor of history at the University of Utah) 2006 as co-director and 2007-2012 as director, who created the Utah American Indian Digital Archive and the Utah Indian Curriculum Project and hosted a number of film festivals on behalf of the AWC.

Bio: Dr. Gregory E. Smoak is an associate professor of history at the University of Utah, the director of the American West Center since 2012, and 2021 president of the National Council on Public History. Dr. Smoak focuses on public history, Native American history, and American West history with special interest on water rights. Photo courtesy of the 2014 Great Salt Lake Issues Forum blog.