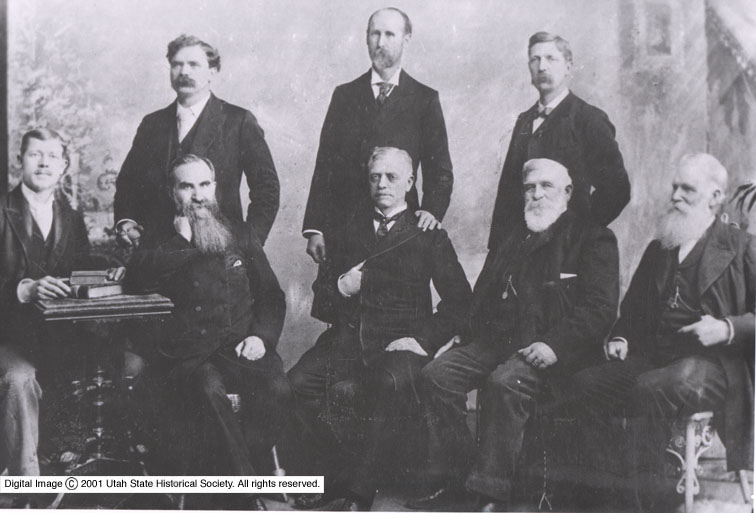 Date: April 27, 2022 (Season 4, Episode 11: 1 hour, 12 minutes & 49 seconds long). Click Here for the BuzzSprout version of this Speak Your Piece episode. The above photograph is of the LDS Church’s First Council of Seventy, circa 1896; (back row) B. H. Roberts, J. Golden Kimball and Rulon S. Wells, (front row) George Reynolds, Seymour B. Young, Joseph William McMurrin and Christian D. Fjeldsted, with John Mills Whitaker (bottom left) as quorum secretary. Courtesy of the Utah State Historical Society. Are you interested in other episodes of Speak Your Piece? Click Here. This episode was produced by Brad Westwood, with help (sound engineering and postproduction editing) from Jason Powers from the Utah State Library Recording Studio.

Utah and Western historian John Sillito, saw many things to admire in his subject B. H. (Brigham Henry) Roberts (1857-1933). His dogged resistance to embracing women’s suffrage [women’s right to vote] was definitely not one of them. A quote in Sillito’s book on Roberts however, underscores how beloved and respected, and tells of his amazing oratory skills, even among those who were staunchly opposed to him.

“It took him some time to gather himself but once he did he was an oratorical avalanche. A stream of language, potent and pleasing, flowed from his lips and caught his listeners until even those who were most bitterly opposed to him were compelled to pay compliment to his power with rapture supplies.  …the suffragists themselves could not but admire his courage, and when he had finished they crowded around him and shook his hands enthusiastically.” “Suffrage is the Theme,” The Salt Lake Herald, May 29, 1895.

There are, to John Sillito’s count, three other pre-existing biographies of Roberts. This did not stop Sillito, in writing an entirely new biography; and for this we are grateful. Yes, this is a “Church of Jesus Christ of Latter-day Saints” story; however, it is almost equally a Utah story; and even more so, a personal story about a scrappy, near-illiterate immigrant child, who in an Horatio Alger-like effort, reached the highest levels of religious, political and intellectual accomplishment in late 19th and early 20 century Utah.

Sillito’s biography offers loads of insights into a rapidly changing Utah (circa 1880-1930s), and besides Robert’s childhood life in England and then 1860-70s Utah, and his personal life and friends, the larger themes include local and national politics (including Roberts’ resistance to the so called Mormon Political Manifesto of 1895), the abandonment of a central religious tenet (polygamy), Utah gradually joining national marketplaces, and Utah and the LDS Church embracing larger political trends including Jim Crow (a body of statutes that legalized racial descrimination and segregation). This episode is fast paced and full of new insights and facts about B. H. Roberts, and the radidly changing world around him.

Bio: John Sillito, Emeritus Professor, Weber State University (1977- 2018), is a native Salt Laker, and besides the book in discussion, he is the co-author of A History of Utah Radicalism: Startling, Socialistic and Decidedly Revolutionary with historian John S. McCormick (Utah State Historical Society’s Best Book in 2011). John’s edited collection of B. H. Roberts diaries—published as History’s Apprentice—received the Mormon History Association’s best documentary award in 2005. Sillito is the recipient of a lifetime service award from CIMA (Conference of Intermountain Archivists) awarded in 2013, and was made a Fellow of the Utah State Historical Society in 2021.

Do you have a question or comment, or a proposed guest for “Speak Your Piece?” Write us at “ask a historian” – askahistorian@dtsanonymoususerutah-gov