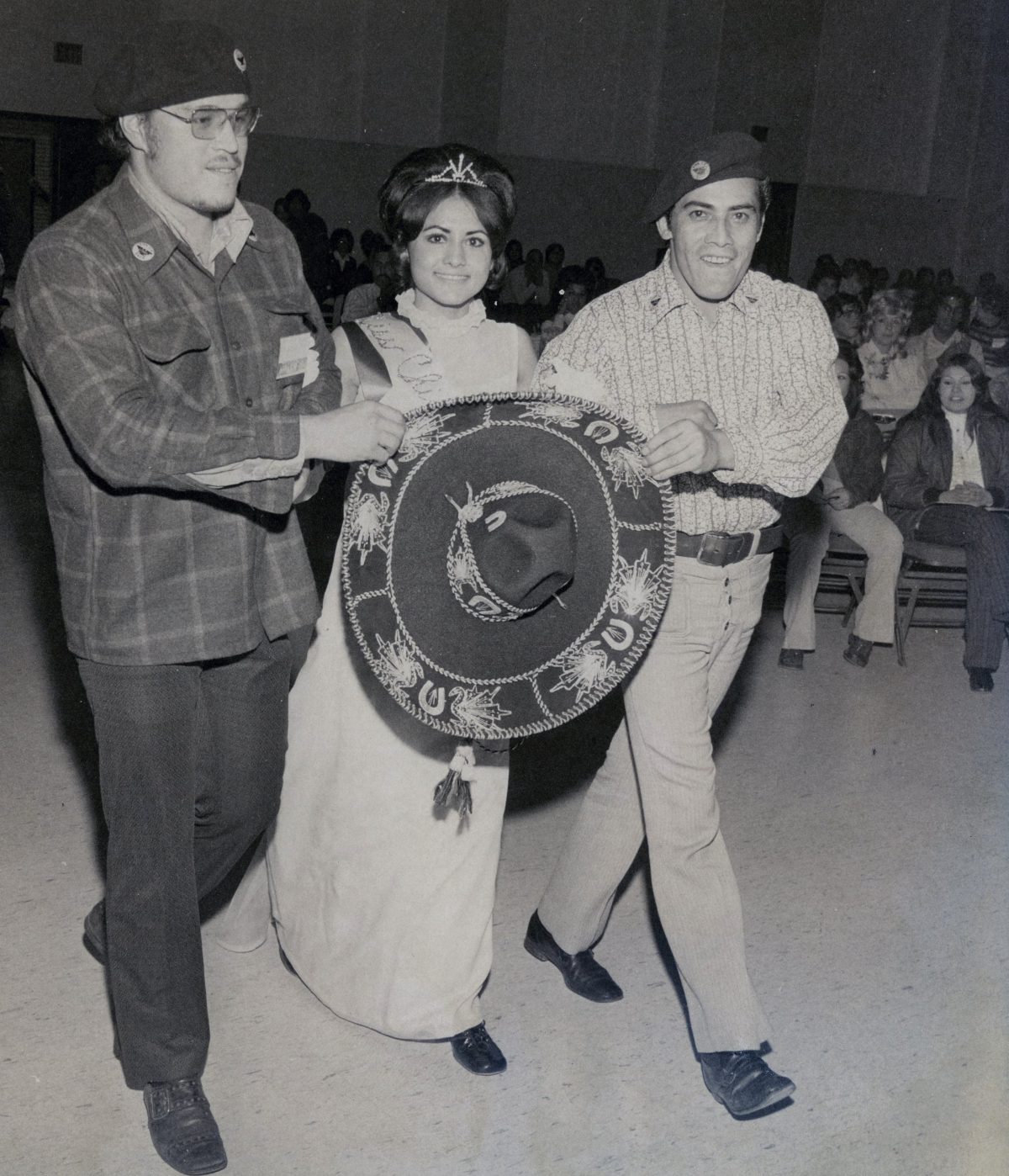 Above image capton: Two men accompany “Señorita Chicana 1971” (Miss Chicana 1971) at “Adelante [Ahead!]: A Plan for Action Conference,” held Oct. 29-30, 1971, in the Salt Palace. Elio Rios from Puerto Rico (left) is the ony individual identified in this image. This gathering was sponsored by the Utah Equal Opportunity Coalition, “Spanish Speaking Committee.” The men are wearing brown berets presumably in solidarity with Los Boinas Cafés (Brown Berets), a 1960s pro-Chicano organization which had chapters in Ogden and Price. Front and center and being held in front of the Señorita Chicana is the symbol of Mexican culture, a sombrero. This widely attended public conference gives evidence of the size and influence of Spanish speakers in Utah by the early 1970s.

During the early 1890s and into the 1900s Latino/as slowly started to arrive in the Utah Territory. It was largely railroad companies and later agriculture that drew Latino/as into Utah’s economy. Old west side community members are difficult to historically discover, especially in racially biased US census records.

In 1881, the first railway linked Mexico to the American Southwest. American corporations built and mainly controlled Mexico’s first major railroads. By the 1890s, rail lines connected Utah to the rest of the American Southwest. The expansion of the railroad made immigration to Utah territory possible for many Latinos who lived in the Southwest, Central, and South America.

By the turn of the twentieth century, a handful of railroads connected Utah as far as west Texas to the southeast and California to the west. Railroad tracks often followed trade routes previously forged by Native Americans and later followed by New Spain and Mexico. During the late 1800s, Railroads became conduits for the recruitment and transportation of Mexican laborers into the region. Notably, railroads were responsible for strengthened and extended Hispanic cultures far into northern portions of the American West.

During the late 1890s and 1900s, many Mexican and Latino immigrants migrated to northern areas of the West to find employment.  These Latino/as found jobs in railroad and mining industries alongside African Americans and immigrant laborers from around the globe.  Many of the Mexican and Latino laborers had worked for Mexican railroad companies before they arrived in Utah. Most railroad companies chose to employ Traqueros, a name given to Mexican track workers who worked primarily north of the Rio Grande, to fill their open positions. Traqueros performed the same work as the Gandy Dancers or the Section Hands who did the hardest and most dangerous jobs including grading and laying and maintaining track. Whites often avoided the positions filled by Traqueros because of the lower pay, unsafe working conditions, and the high probability of turnover.

During the Mexican Revolution, Salt Lake City saw a rapid increase in its Mexican American population.  Many Hispanics moved to Utah to work in the state’s expanding agricultural industry (ranching, fruit and orchard, dairies and truck farming). Although the United States Congress passed the Immigration Act of 1917 and 1924 to reduce the number of people entering the United States, a provision allowed Mexican immigrants to obtain a temporary permit because railroads, farmers, and other companies needed laborers. From the 1920s onward, many farmers turned to undocumented Mexican laborers to meet their demands for inexpensive labor.

Latinos moved into the Pioneer Park neighborhood because it was one of the few places where they could conduct business and rent or own property.

By the 1920s, Mexican immigrants and Latino/as created a thriving community on Salt Lake City’s west side.  Their primary purpose of emigrating to Utah was to pursue economic opportunities and to make a better life for themselves and their families.  Due to several factors, including proximity to work or existing family and friends who lived in the area, Latinos moved into the neighborhood. Above all else, it was because the neighborhood was one of few places where they could rent or own property.

Beginning in the 1910s, mining companies, including the Kennecott Copper Mine, began to import hundreds of Latino laborers from southern Colorado and Northern New Mexico to replace higher wage laborers. Because Latinos were willing to work for less pay, owners and administrators hoped that by hiring them, they could offset rising mechanization costs while meeting increased demands for copper. The arrival of Latino workers did cause other minority laborers to lose their jobs.

Twentieth-century rapid industrialization and the commercialization of new inventions (the electrical grid, telephones and electrical appliances) required the mining and processing of minerals, ores, and especially electricity-conducting copper. In 1914, Kennecott reported that it had extracted over a billion dollars in copper from its Utah mine. Of course, it was primarily the companies’ immigrant laborers, the Italians, Greeks, Japaneses and Latinos among others, who extracted this treasure from Utah’s Oquirrh Mountains.

Many members of the west side’s Latino population worshiped together. In 1921, the Church of Jesus Christ of Latter-day Saints noticed that over 100 Latinos attended a church service held in a west side restaurant.  In response, the LDS Church began to offer Spanish-speaking services in the middle of Pioneer Park. In 1923, the LDS Church organized the Rama Mexicana Branch.  Soon after, the branch (later renamed the Lucero Ward) met in the empty Sixth Ward meeting house.

The west side also had a strong Catholic membership. During the mid-1920s, the Salt Lake City Roman Catholic Diocese determined there were ninety-six Roman Catholic Latino/a families who lived between the Union Pacific and Denver & Rio Grande Western railroad depots.  There were also over a hundred Spanish speaking children attending public schools in SLC. With this information in hand, Father Francis M. Alva recommended that the diocese create a mission church and school named “Our Lady of Guadalupe” in the Pioneer Park neighborhood.

In 1927, the diocese purchased an old pioneer adobe home at 528 West 400 South to convert into a convent and meeting space.  With the help of six nuns from the Order of the Sisters of Perpetual Ordination, also called Las Madres or “the mothers,” opened the convent where the sisters taught catechism, ran a mother and girls club and a kindergarten, and taught an after school Sunday school program.  They also ran a summer school program. The sisters remained at the Guadalupe Mission until 1939.

There are many stories about how the Catholic church enriched Salt Lake City’s Latino/a population.  For example, Edward Mayer, a retired professor of Spanish, recalls that his mother, Bertha Mayer, was so grateful for the Spanish-speaking services and programs offered by the parish.  Every Saturday night she and her children would polish their white patent leather shoes in preparation for the Sunday mass. Even though Mayer owned an automobile, she proudly walked her family to church services each Sunday, passing Pioneer Park on her way to and from mass.

There were many Catholic leaders who served people living in the west side. Assistant pastor to the Cathedral of the Madeleine, James E. Collins, took up this work, devoting his life from 1930 to 1957 to the mission. Living a spare life, Collins learned to conduct mass in Spanish, and accepted cheerfully his parishioner’s public corrections, which were frequently offered in unison when he offered the mass in broken Spanish. They loved him all the same for trying.

The LDS and Catholic churches continue to serve their Latinx congregants into the twenty-first century. Latinos who attended the LDS branch experienced, as one historian noted, “more economic, social and psychic benefits” including employment and tuition assistance, networking, and character references. The latter when local police officers discriminated against them. The west side’s Latinx population also found other ways to build community including the organization of the LDS Rama branch’s basketball team. Interestingly, the team frequently had more Roman Catholic players than Mormon players.

Salt Lake City’s demand for low wage laborers drew many Latinx and Mexican immigrants to the city’s west side, as well as across the Salt Lake Valley. Once there, they developed tight-knit communities often tied to their religious affiliations.  In all, SLC’s Latino populations contributed to the diverse and vibrant economic, religious, and social culture of the city’s west side.

We hope you join us for our next installment of Salt Lake West Side Stories, where we will continue to explore the history of Latino/as and the west side.

Contributors: A special thanks to Charles (Chuck) Salazar and Jennifer Macias for contributing to the contents of this post. A profound gratitude to Lisa Nelson and the narrators at the Utah State Library’s Reading for the Blind Program for creating the audio for this post.

Vincent V. Mayer, et. al., Working Papers toward a History of the Spanish-speaking People of Utah: a report of research of the Mexican-American Documentation Project, American West Center, University of Utah, 1973, https://collections.lib.utah.edu/details?id=1396789&facet_setname_s=%22uum_awcrp%22&q=%28%28Night+AND+Club%29+AND+%28Salt+AND+Lake+AND+City%29%29+AND+%28dance%29.