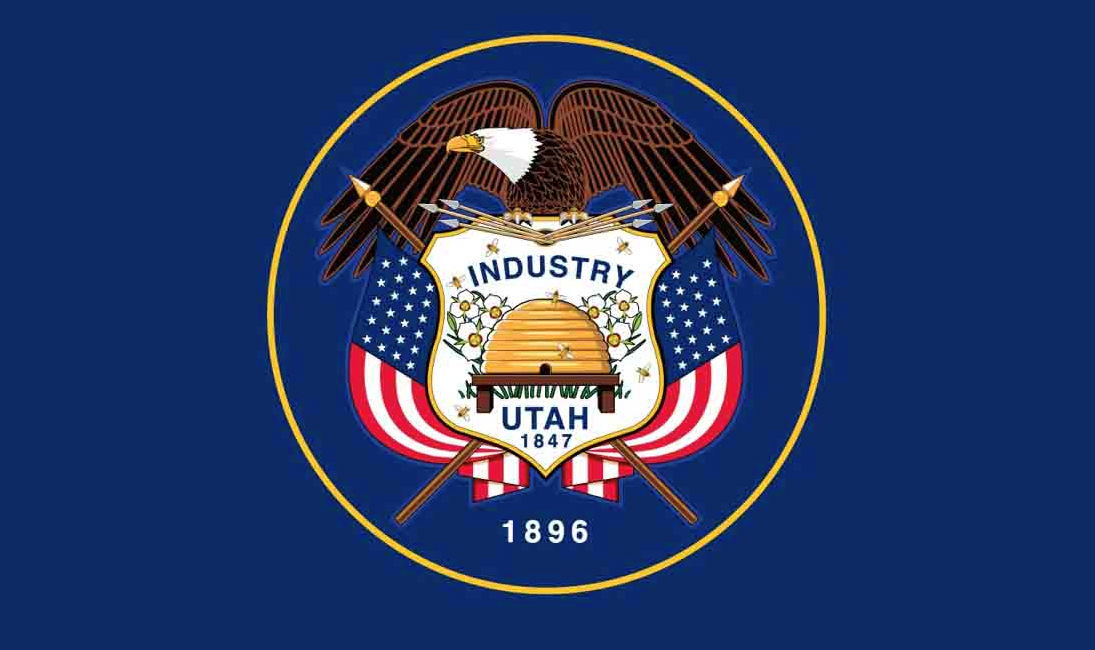 Date: June 21, 2021 (Season 3, Episode 7; 55:28 minutes). Click here for the BuzzSprout version of this Speak Your Piece episode. The image above is the current 2011 version of the flag of Utah. Courtesy of John Hartvigsen (Retired Vexillologist, Colonial Flag Company).

In this Speak Your Piece episode, three guests: Political Historian Ronald Fox, State Representative Stephen Handy and State Senator Daniel McCay, discuss the idea of a new flag for Utah. Law SB-48 which was passed during the last legislative session (sponsored by Handy and McCay) and signed by Governor Spencer Cox, does not actually call for a new flag, but creates a task force to look into the possibility of one.

If you are supportive of the idea, against it, or you want to hear more regarding the matter, here is the place to start.

Why did it take so long for Utah to receive an official state flag after statehood? Interestingly, Utah did not have an official territorial flag during the territorial period (1850-1896) and Utah’s first flag was not approved until fifteen years after statehood in 1911. Why were no flags proposed or approved for Utah for over a half a century? Write to us using the email listed below.

This episode also includes the history of Utah’s current flag and outlines SB-48’s intentions. Governor Spencer Cox’s June 14th, American Flag Day press release, announced that he will, at least initially, serve as chair of the task force, joined by Lt. Governor Deidre Henderson, Jill Remington Love, Executive Director of the Utah Department of Culture & Community Engagement, along with three state senators and three state representatives, all to offer a transparent and all encompassing statewide process, for considering the idea. See also the below “Topics Discussed in Time ” list.

Bio: Senator Daniel McCay represents District 11 (R-Riverton, Draper and Bluffdale), and was formerly a member of the Utah House of Representatives, representing District 41 (R-Riverton and Bluffdale) from 2013 to 2018. Among numerous other committee and subcommittee assignments, McCay serves on the Infrastructure & General Government Appropriations Subcommittee and the Natural Resources, Agriculture & Environmental Quality Appropriations Subcommittee. McCay earned a JD from Willamette University, and professionally is an attorney, real estate portfolio manager and vice president of the Suburban Land Reserve, Inc. He lives in Riverton with his wife, Tawnee, and their six children.

Bio: Representative Stephen G. Handy (R-Layton) represents Utah’s 16th Legislative House District. Appointed in 2010 he has been re-elected five times thereafter. Two of his committee assignments include serving as Chair of the Political Subdivisions Committee, and as a member of the Public Utilities, Energy & Technology Committee. Handy also serves as co-chair of the Utah Legislature’s Bi-Partisan Clean Air Caucus. Handy owns a public relations and marketing firm which he launched after 17 years as the marketing director for the Ogden Standard-Examiner and the Deseret News. A graduate of the U of U, Steve has a bachelor’s degree in English and a masters degree in Human Resources Management. He and his wife Holly, have six children and 16 grandchildren and have lived in Layton for 42 years.

Bio: Ronald L. Fox is a long-time rare book, artifact and photograph dealer. He is also an author and political historian, and a former owner of a public affairs firm focusing on government advocacy. Fox has served as an advance coordinator for Executive Branch visits to SLC from Washington, D.C., and he served on the Utah Martha Hughes Cannon Statue Committee. He was recently appointed by Utah Governor Spencer Cox, to be a co-chair of Utah’s Semiquincentennial (1776-2026) United States of America Committee.