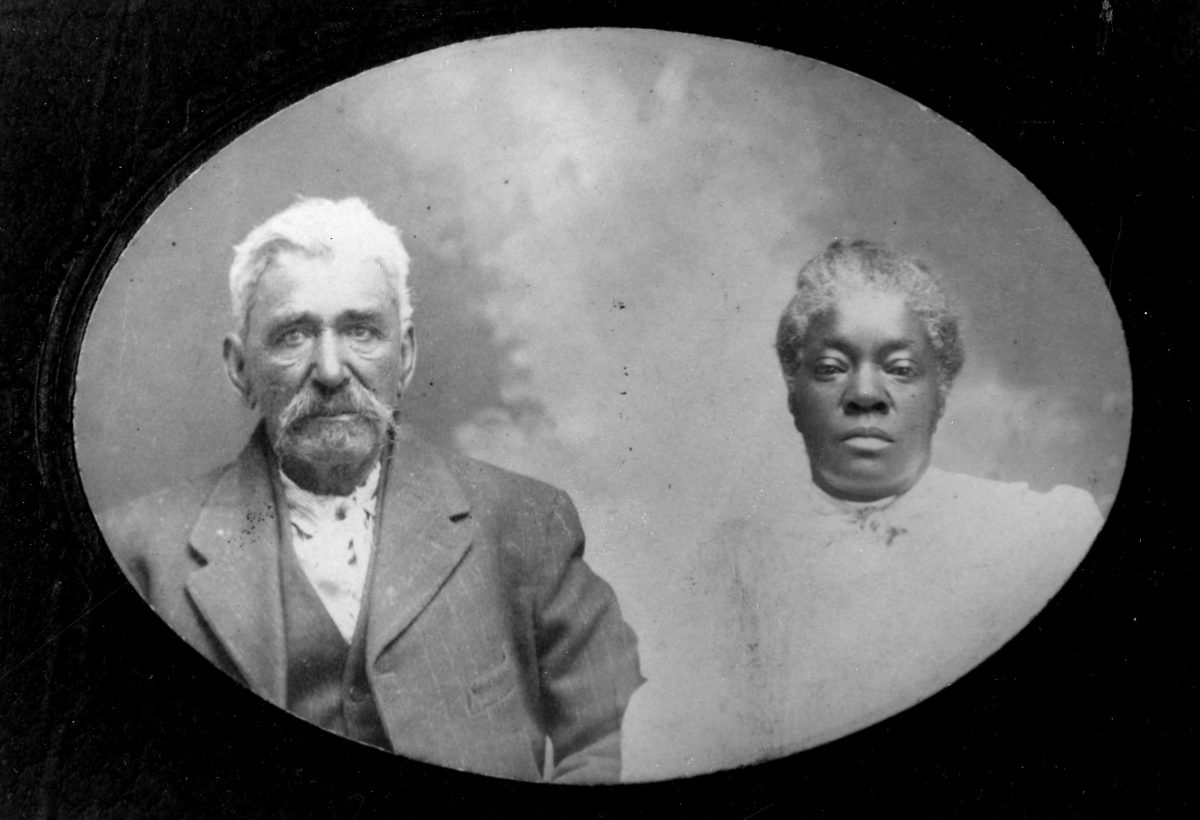 June 2, 2022 (Season 4, Episode 9, episode length: 61 minutes) Click here for the BuzzSprout version of this Speak Your Piece Episode. Photograph caption: wife & husband, George and Lucinda Flake Stevens (Union, Utah Territory); they met at dance while George was working as a wagon freighter. Born in Mexico, George’s father was white and his mother Hispanic. Lucinda was the daughter of Martha Crosby and Green Flake, the latter an enslaved African American, who entered the Salt Lake Valley in 1847 as a pioneer. Courtesy of the Peoples of Utah Collection, Utah State Historical Society.

Women, Race and Marriage: This Speak Your Piece episode involves: (a) Women’s history–this is the 2nd in a series about Utah Women’s History, (b) Utah’s new Juneteenth holiday, and (c) a seminar-like discussion on Patrick Mason’s Utah Historical Quarterly article, entitled: “The Prohibition of Interracial Marriage in Utah, 1888-1963 (V. 76, No. 2).” This excellent UHQ article, offers much insights into the law, politics and culture surrounding race in Utah, during the late 19th and 20th centuries. If you want to understand what historical headwinds are pushing up against Juneteenth in Utah, Patrick Mason’s article and this SYP episode will aid you in that quest.

Dr. Cassandra Clark, Utah Division of State History’s Women’s History Initiative coordinator, draws out in this discussion not only the issues about race in Utah, but also challenges us to seek out women’s stories and perspectives. With Mason’s help, Clark explains how to identify motive and biases around historical sources and how bystander male assumptions (in this case male clerks, police officers and newspaper reporters) can no longer be mistaken for women’s stories and perspectives. Next, late 19th century US congressional efforts, and the broader American public’s resistance to Mormon polygamy, along with Utah mirroring the nation’s anxiety about race, all play in this complex story.

“Responding to a nation that portrayed polygamist Mormons as the most deluded and degraded of all people, Latter-day Saints counter attacked by highlighting the moral depravity of their critics. Mormons strong disavowal of miscegenation certainly reflects trends in late 19th century LDS theology and culture, but it also represents a political tactic calculated to deflect attention and criticism at the high point of the national anti-polygamy crusade.” [italics added]Patrick Mason

The heart of this UHQ article involves America’s and Utah’s very wrong and harmful historical assumptions about race, also late 19th c. white legislators’ efforts to restrict, in regards to race, who should or should not marry, in the eyes of the state. And finally, how Utah and the nation sought to codify into law, anti-miscegenation or interracial marriages (most particulary white and black or white and Asian). The use of the term “miscegenation,” is a historical term that has no currency in a society based on respect for all human rights, fundamental freedoms, and racial equality.

On this first nation-wide commemoration of “Juneteenth,” this episode acknowledges and describes this new national holiday; offers the backstory and describes why nationally, and in Utah, this holiday and what it represents is a good thing. Known previously as “Emancipation Day,” “Freedom Day,” and “Black Independence Day,” the date celebrates the two year delayed announcement in Texas, of the end of America’s enslavement of African Americans. Thanks to a broad coalition of Utah House and Senate members, this national holiday was also made a Utah state holiday in February 2022.

To read Dr. Patrick Mason’s article, click on the title: “The Prohibition of Interracial Marriage in Utah, 1888-1963” At present, Mason is the Leonard J. Arrington Chair of Mormon History and Culture, and is an associate professor of Religious Studies and History, at Utah State University (Logan, Utah).

You may subscribe to the Utah Historical Quarterly here.