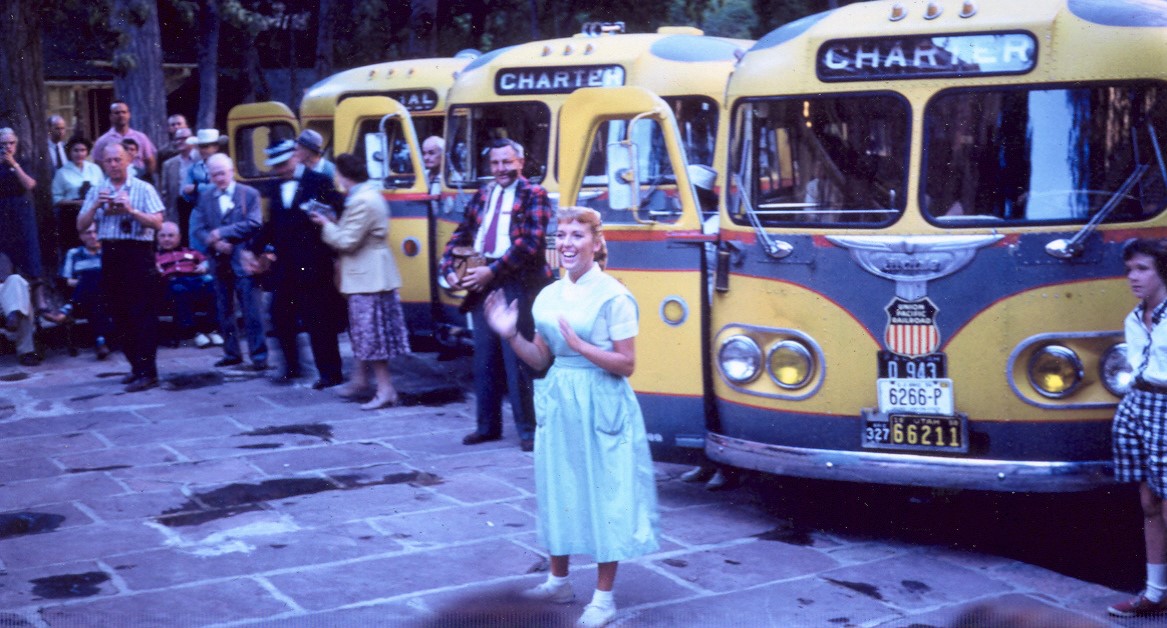 Date: March 1, 2021 (Season 2, Episode 14; 63:00 minutes). Click here for the BuzzSprout version of this Speak Your Piece episode. The above photo is of an early 1950s “singalong,” a daily event where seasonal employees sang their goodbyes to “the dudes” before they were loaded on to the buses for Lund, Utah, to catch a Union Pacific train home. Courtesy of Southern Utah University Special Collections

From 1923 to 1972 the Utah Parks Company (a subsidiary of the Union Pacific Railroad based in Cedar City, Utah) hosted nearly every visitor that came through Zion National Park, Bryce Canyon National Park, Cedar Breaks National Monument and the North Rim of the Grand Canyon. The UPC transported, guided, fed, entertained and housed tens of thousands of paying tourists each year, using primarily a workforce of young men and women, ages 16 to 26 years of age.

In this episode of Speak Your Piece, authors Ryan Paul and Janet Seegmiller, tell the story of the estimated 40,000 high school and college age students, who spent their summers working for UPC. Using hundreds of oral histories, written recollections and photographs, and other historical sources, they tell the stories of coming of age; hard work, comradery and conflict; the comical and revealing; and how tens of thousands of America’s youth fell in love with Utah’s and Arizona’s magnificent, sublime national parks.

Singaway, Working and Playing for the Utah Parks Company, 1923 to 1972 (2019), is available only through the Zion National Park Forever Project website.

This workforce included “locals” and students from throughout Utah, and urban and rural youth from around the country, from New York, Ohio, Pennsylvania, California, Nebraska and more. All hired to serve, prepare and care for the tourist, or “the dudes (referring to both men and women)” who traveled by train and buses, to stay in Union Pacific Railroad’s lodges and Inns.

An exhibit regarding the 40,000 seasonal employees who worked for the Utah Parks Company may be seen at Utah’s Frontier Homestead State Park Museum.

Bio: Ryan Paul is a university lecturer in history at Southern Utah University (SUU), specializing in public history and the history of America’s national parks. For nineteen years, prior to this academic appointment, Ryan served as museum curator at the Frontier Homestead State Park (Cedar City, Utah, Utah Department of Natural Resources) which is part open air museum and part indoors facilities, that tells the stories of early Euro-American settler of Iron County and southwest Utah.

Bio: Janet Burton Seegmiller (retired in 2014 as senior librarian and director of Special Collections, Gerald R. Sherratt Library, Southern Utah University. Janet spent much of her career identifying, collecting and making available unique archival and rare historical materials about Southern Utah. She is the author of The History of Iron County, published by the Iron County Commission and Utah State Historical Society, as part of the Utah Centennial County History Series (published in 1998) and Be Kind to the Poor: the Life Story of Robert Taylor Burton, published in 1998.