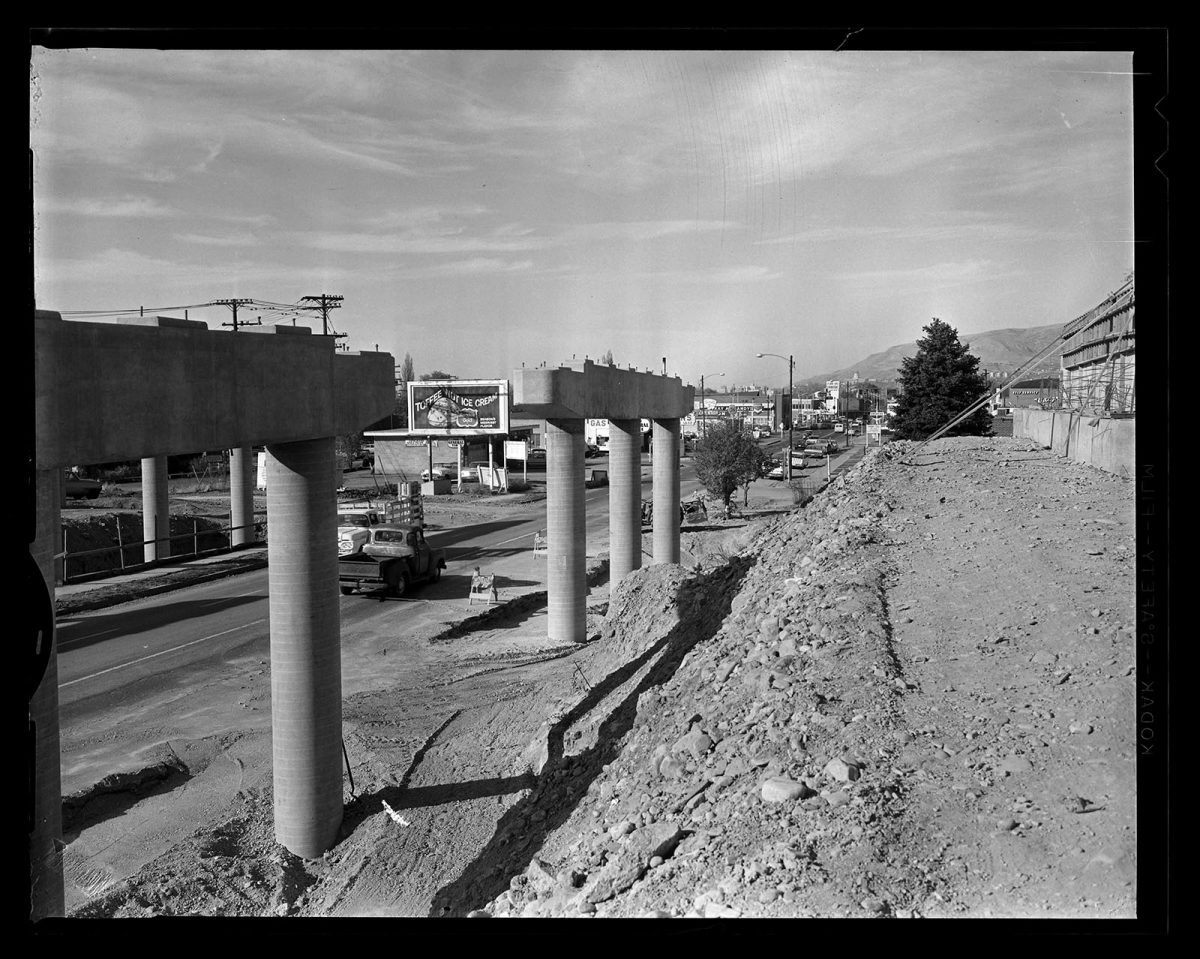 In 1956, President Dwight D. Eisenhower signed into law the Federal-Aid Highway Act. This Act allowed for the construction of an interstate highway system with the main purpose of defending the nation from foreign attack.

In Utah, representatives from the state legislature called upon eminent domain—the condemning and purchasing of private property at fair market value to construct an interstate that would run through Salt Lake City. The completion of Interstate 15, with its direct connection to the Pioneer Park neighborhood, changed SLC’s west side in several ways.

The I-15 construction project took five years to complete (1959 to 1964), and the route followed the existing railroad corridors. The on and off-ramps to downtown also followed the precedents set by the Utah Central, the Oregon Short Line, the Union Pacific, and the Denver & Rio Grande Western railroads access to downtown by running directly through the Pioneer Park neighborhood.  The I-15 on and off ramps ran through the Pioneer Park neighborhood via massive viaducts—or long bridge-like concrete structures—that connected to the freeway or offered east to west access at 400, 500, and 600 South streets. State and city governments razed just under ten percent of west side residential and industrial building stock to make way for the interstate. Altogether, with the multi-lane freeway and ramps constantly expanding, the freeway first joined and then mostly replaced the acres of railroad corridors that ran through the neighborhood.

Pioneer Park is center city’s only large, publicly accessible, green space. It is also the only remaining public square as planned by the pioneers in 1847 and 1848.

The most recent I-15 expansion project was completed in 2001.  The project included the reconstruction of a railroad overpass and freeway underpass on 400 South, with the ramp beginning its ascent two blocks west of Pioneer Park, instead of at the southwest corner of the park. The replacement ramp opened up the park to more sunlight and created a less ominous urban landscape.

Pioneer Park is center city’s only large, publicly accessible, green space. It is also the only remaining public square as planned by the pioneers in 1847 and 1848. It is also the only large public space offering a substantial amount of nature into the city. So what became of the other parks in the original city plan?  In short, the other parks accommodated SLC’s growing government, educational and business sectors.  In the late 1880s, Union Square park became the second location of the University of Deseret/University of Utah. Later the campus was torn down and replaced by Salt Lake City’s West High School, still located at 241 North and 300 West.

In 1894, the city built the Salt Lake City and County Building on what was previously known as Washington Square (451 South State Street). In 1848, the Tenth Ward Square was labeled as a public space or park as part of Plat B. Initially, the square served as a public garden and then later as Utah territorial fairgrounds. In 1908, the Tenth Ward Square was sold for the public good to make way for Salt Lake City’s streetcar sheds. It is now known as Trolley Square. Finally, the Salt Lake Temple grounds or Temple Square, which was and is the centerpiece of the original Salt Lake City design, is privately owned by the Church of Jesus Christ of Latter-day Saints, and although park like, it was never considered a public park. The temple grounds are beautifully landscaped, open to the public; however, they are not used for non-church related gatherings or for recreation.

Salt Lake City today has a system of 85 municipal parks, a thriving urban forest, and many access points to adjacent public lands. However, Pioneer Park is the only public square to survive as envisioned by Brigham Young and the Mormon Pioneers. As is the case with all densely urban areas, safe and inviting green spaces like the Pioneer Park are essential to a city’s health and economic vitality.

In our next installment of Salt Lake West Side Stories will make the case that the Pioneer Park neighborhood is the wellspring of modern-day Salt Lake City.

Would you like to read the next post? PIONEER PARK NEIGHBORHOOD: THE WELLSPRING OF MODERN SALT LAKE CITY

Related Activity: Take a walk or run around Salt Lake City’s original public squares described in this post. Ponder how different the city would be if these spaces remained open for public gatherings and recreation, rather than transformed into government, utility and educational uses. May we suggest you begin at Trolley Square (once the Tenth Ward Square), then walk to the Salt Lake City & County Building (once Washington Square), and then onto the West High School (once Union Square), then finishing your walk or run at Pioneer Park.