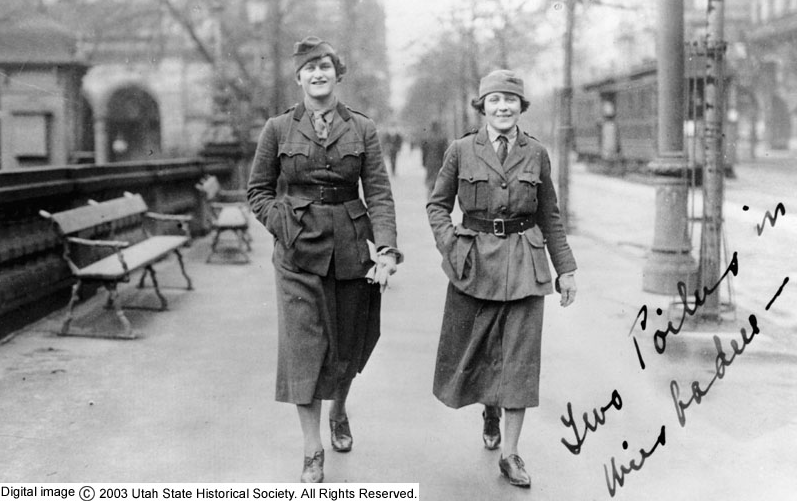 Date: March 28, 2022 (Season 4, Episode 10: 52 min. & 8 sec. long). Click Here for the BuzzSprout version of this Speak Your Piece episode. The above photograph is of Maud Fitch (right), who is mentioned in this article, an ambulance driver during World War I, circa 1917-1919. Photo courtesy of the Utah State Historical Society Classified Photo Collection. Are you interested in other episodes of Speak Your Piece?  Click Here. This episode was co-produced by Brad Westwood, Chelsey Zamir, and Cassandra Clark, with help (sound engineering and postproduction editing) from Jason Powers from the Utah State Library Recording Studio.

This SYP episode is part of an ongoing series about women’s history in Utah. It involves a discussion with Dr. Cassandra Clark about Miriam B. Murphy’s 2015 Utah Historical Quarterly article, entitled: “‘If Only I Shall Have the Right Stuff’: Utah Women in World War I,” (Fall, 1990: Vol. 58, No. 4), which draws on stories of Utah women’s participation in WWI.

Miriam Murphy sums up her argument: this article explores the Utah women who participated in a range of war-related activities in “direct participation with the military or with civilian organizations that took them to the battlefront.” (pg. 336) A longtime editor for the UHQ, Murphy states that many of these women’s activities and accomplishments to the war effort went unnoticed and received little to no historical scrutiny.

Dr. Cassandra Clark details in this discussion the many ways in which these Utah women participated in the war effort during WWI. As Murphy mentions, the roles women played in the war were often undocumented and unknown, Dr. Clark states that this article places on the map a more detailed view of exactly who some of those participants were and the accomplishments they made and with this, we can see that women do, in fact, have a long history of involvement in war efforts.

Due to gendered ideas in the early 1900s, many women were still limited within the organization of war. Nonetheless, women were involved from the front of the war effort with involvement in nursing and transporting wounded soldiers, all the way to the back with clerical and canteen workers. For the most part, middle class white women were the main participants as neither government nor US military branches offered any funding for women’s participation. Two women by the names of Maud Fitch and Elizabeth McCune were ambulance drivers but were responsible for purchasing their own vehicles, providing their own living expenses, and McCune even went so far as to become a certified mechanic to repair the ambulance herself. Many Utah women were nurses serving at the forefront of the war. Murphy states that about 80 Utah registered nurses served in the war (pg. 343).

Dr. Clark describes that the best way to understand what is going on in the US at this time is a country in shift. Many questions of identity, brought on by the war, were explored. Initially, the US, and by extension Utah, were reluctant to get involved in a war considered a European issue. Once officially involved, many Americans found themselves asking the question of what it looks like to be an American, what does that identity entail? Concerns arise around particular groups of people (immigrants, African Americans, Native Americans) not being “American enough” and the need for an “Americanization” class. Further, women were challenging gender roles by contributing to the war effort, spurring a crisis of masculinity, gender roles and identity.

Clark concludes in this discussion with SYP host Brad Westwood, that women did, in fact, have the “right stuff” as the title of the article alludes. Women fully embraced participating in the war, often funding their own involvement. Unfortunately, once the war ends, what is highlighted and remembered is men’s participation, and what’s lost to the annals of history, is the full story of women’s involvement, especially that of working-class women and women of color [whose stories are beyond what is described in this article].

Bio: Miriam B. Murphy was the Associate Editor of the Utah Historical Quarterly from 1970-1997, and in the same unappreciated way helped shape the UHQ into a respected state history journal. Murphy is now considered a pioneer in bringing to the fore women’s history in Utah.