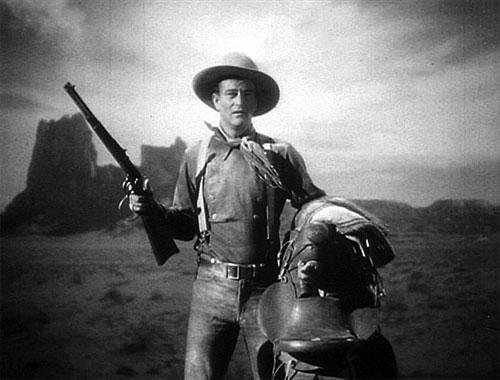 Date: December 9, 2019 (Season 1, Episode 5; Part One: 31:50 minutes – Part Two 19:30 minutes). Click for the Part One and Part Two Buzzsprout versions of this Speak Your Piece Episode. The above image is of Hollywood’s most beloved cowboy John Wayne, brandishing a Winchester rifle with Monument Valley (known also as Tsé Biiʼ Ndzisgaii (Navajo) in the background. Monument Valley is where John Ford filmed Stagecoach in 1939 and The Searchers in 1956 (the 4th & 1st rated all-time best Westerns). The location serves as the quintessential “imagined western landscape”. The site was used before Ford and Wayne arrived, during the silent film era (circa 1910s to late 1920s). Are you interested in other episodes of Speak Your Piece? Click here for more episodes.

Warmer weather, Groundhog Day (Feb. 2) and Valentine’s Day (Feb 14), have offered the Speak Your Piece team visions of springtime travel, including visiting famous film locations across Utah. If you are considering such a trip, or wanting to learn more about Hollywood’s love affair with Utah, listen to this SYP episode (two parts) with Dr. James D’Arc, Utah’s most well-known and beloved film historian. D’Arc founded the BYU’s Motion Picture Archive, Film Music Archive, Harold B. Lee Library Film Series and the BYU Film Music Archives CD series and authored When Hollywood Came to Utah, which is in its 3rd updated edition, as of 2019.

In our estimation D’Arc and his book, filled with hundreds of stories and images, divided by regions, served as the mother-ship for all subsequent web-databases and story-map lists. We have included them too in the show notes. A remarkable speaker, Jim D’Arc tells how Hollywood’s and Utah have worked together for over a hundred years. “The postcards Utah sends around the world–as D’Arc relates– are films!”

D’Arc explains how the Perry Brothers–Chauncey, Whit and Gronway—convinced filmmakers to come to Utah; film that documented landscapes long-since gone; early silent films made in Utah; how over a thousand films (feature film, TV series and documentaries) have been filmed in Utah; the first Hollywood “talking picture” made at Grafton; Utah history related films (regarding polygamists and murderers, serial or otherwise); Irish-American film director John Ford’s love of Utah’s people and landscapes; Butch Cassidy and the Sundance Kid (1969), Footloose (1984), Utah’s 1947 official Centennial film Ramrod (a smoldering western film noir the Utah legislature did not like); the 1956 film The Conqueror, filmed during atomic bomb testing; and finally, how hundreds of Utah Native Americans (mostly Navajo or Dené ) served as stand-ins for both Plains Indians and 12th century Mongolians!

Bio: Dr. James V. D’Arc: While in his mid-20s as a BYU undergraduate, D’Arc convinced the BYU Library to let him document America’s film industry; not just films about Utah or Mormonism, but the entire film industry, circa 1910-2000. Everything that documented the “culture making” and “culture reflecting” industry. D’Arc gathered original motion pictures, music scores, film scripts, art work and storyboards, personal manuscript related collections, photography, even a couple of Oscars–the award statuettes from the Academy of Motion Picture Arts & Science. Beginning as a department secretary, then as the Arts & Communication archivist, D’Arc worked on advanced degrees, became an adjunct professor in the College of Arts & Communications, founded and directed a film music label, and nudged the university into building a two hundred seat theater for screening original 16mm and 30mm films. At his retirement, D’Arc left arguably the largest, most historically significant collection of its kind in the interior Western US, valued in the tens of millions of dollars, and contributed appreciably to the classic movies phenomenon that has exploded during the last thirty years.

To read about or purchase a copy of When Hollywood Came to Utah (3rd Edition, 2019) you may go to the publisher’s site Gibbs Smith Publishers or take this ISBN number:1423652800 and high tail-it to your local independent bookseller, and buy a copy there.