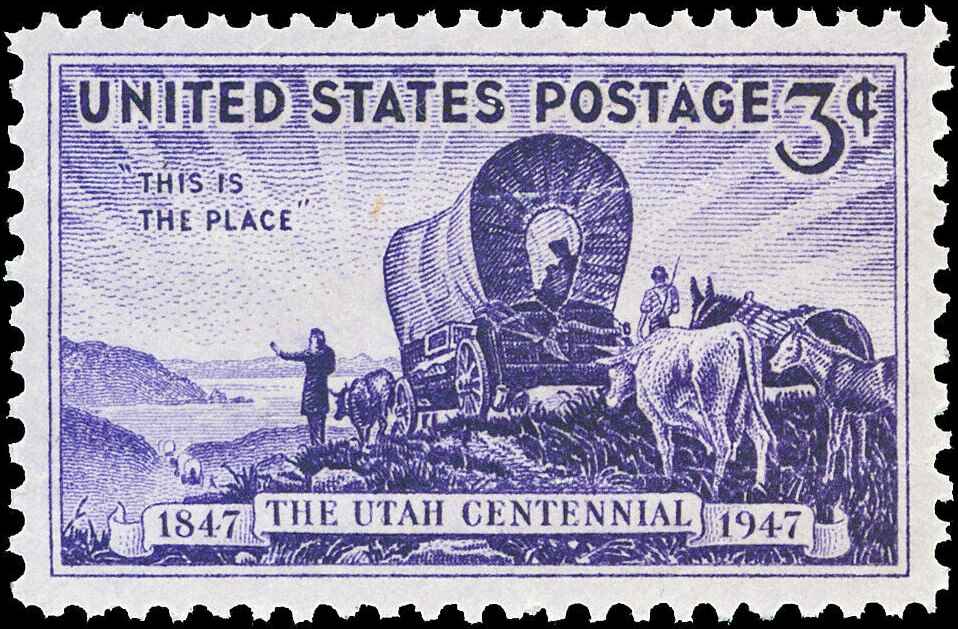 January 24, 2022 (Season 4, Episode 3; 1 hour and 15 minutes). Click here for the Buzzsprout versions of this episode. The above image is of the U.S. Postal Service’s 3 cent 1947 commemoration stamp, which celebrated the arrival of the Mormon pioneers to the Salt Lake Valley on July 24, 1847 (courtesy of Wikipemedia Commons). Are you interested in other episodes of Speak Your Piece: A Podcast About Utah’s HIstory? Click here for more episodes.

Just in time for Utah’s 2022 July 24th Pioneer Day celebrations, this episode of Speak Your Piece (SYP) offers new research and new approaches, regarding the first forty-seven years (1846-1893) of a one hundred and seventy-five year relationship between Utah and the Mormons. Before you celebrate Utah’s 24th of July, load-up on some new Utah history, offered by LDS Church historians Matthew J. Grow and Scott Hales, via a discussion with SYP host, and Utah’s Senior Public Historian Brad Westwood.

The book discussed in this episode: Saints, Vol. 2: No Unhallowed Hand, 1846-1893, The Story of the Church of Jesus Christ in the Latter Day, produced by the Church History Department, and published by Deseret Book in 2020. The volume covers from 1846, when the largest branch of the Mormon church made it way, in earnest and en masse, to settle outside of the United States in upper Mexico; and ends in 1893, when the Salt Lake Temple was dedicated, some forty years after its groundbreaking ceremony, in a series of ticket-only ceremonies held between April 6 and April 24, 1893.

Topics discussed in this candid open interview with two of the LDS Church’s top historians includes (among numerous other subjects): the purpose of history within the church, the authors’ use of extended links to deeper organizational web sources, the internal process used to produced history by the Church History Department, more national and regional history is described (broader contexts), the use of spiritual experiences in the historical narrative, and the church’s phenomenal expansion in the second half of the19th century. The book also offers a concerted effort at telling more women’s history–mostly personal stories that have been woven throughout the volume.

Next, there is a good helping of “difficult history,” including the church’s interactions with issues of race, minorities and non-Mormons, its relationships with Native American communities, the conflicts related to forty-seven years of federal appointees governing Utah as a territory, and the complex and unending story of polygamy (some demographers think conservatively 1% of Utah’s current population is engaged, in one way or another, with polygamy). All together this new LDS Church history series is a commendable effort (from the largest and most well funded private history organization in the Intermountain West), as many topics and themes discussed–including historians judiciously describing historical mistakes made–would in previous official histories, not even be considered let alone treated.

In April of this year (2022), a third volume was released, focusing on the years 1893-1955. Utah’s history is covered in this follow-up volume; however, not as much as the second volume, which largely describes the Mormon Church’s colonizing efforts across the Intermountain West. The new four volume church history series ostensibly updates (maybe replaces) the six volume 1930s First Presidency approved The Comprehensive History of the Church of Jesus Christ of Latter-day Saints authored/edited by B. H. Roberts.

Bio: Dr. Matthew J. Grow, is Managing Director of the Church History Department of The Church of Jesus Christ of Latter-day Saints. In that capacity, he leads a team of history professionals who collect documents and artifacts, preserve them, and promote understanding of the LDS Church’s past through a publishing program, a research library, a museum, and many historic sites. Previously Grow served as a general editor of the Joseph Smith Papers Project. Matt received his PhD in American history from the University of Notre Dame. He and his wife Alyssa, live with their four children in Sandy, Utah.

Bio: Dr. Scott Hales is a writer and historian for the LDS Church History Department since 2015. He serves as a general editor and lead writer for Saints, the aforementioned four-volume history of the Church of Jesus Christ of Latter-day Saints. He has a BA in English from Brigham Young University and an MA and PhD in English from the University of Cincinnati. He has published several articles in academic journals on subjects related to Latter-day Saint poetry and fiction. He lives in Eagle Mountain, Utah.

To purchase a copy of Saints, Vol. 2: No Unhallowed Hand, 1846-1893, The Story of the Church of Jesus Christ in the Latter Day, click here. To listen to this book in audio form click here. To read and learn more about the series, including the latest volume, click here.