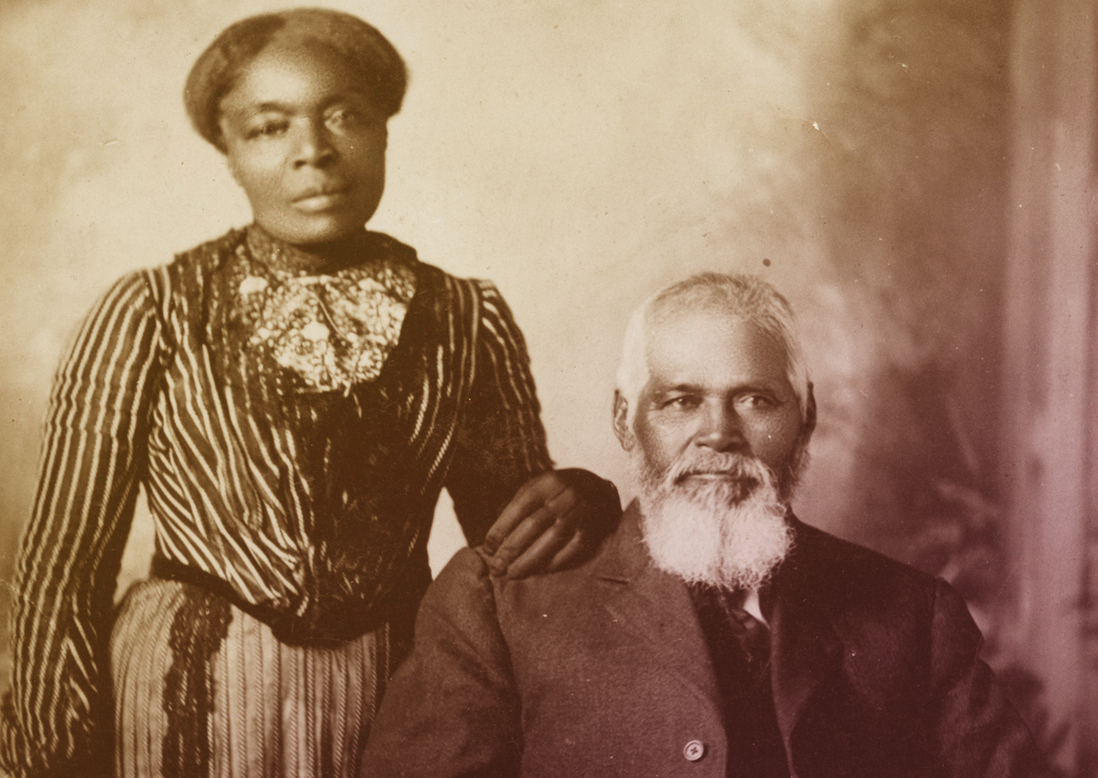 Date: November 25, 2019 (Season 1, Episode 3; 45:00 minutes). Click for the Part One and Part Two Buzzsprout versions of this Speak Your Piece Episode. The above image is a photograph of Samuel and Amanda Chambers, a 19th Century Mormon Couple. Image Courtesy of CenturyofBlackMormons.Org. Are you interested in other episodes of Speak Your Piece? Click here for more episodes.

“Black Saints were among the first to arrive in the Salt Lake Valley in 1847 and have been a part of the Mormon experience since the beginning.” This is an excerpt from Century of Black Mormons.Org, a research database that seeks to document and recover the identities and voices of Black Mormons. University of Utah Professor of Mormon History, W Paul Reeve, spoke to “Speak Your Piece” host Brad Westwood about the public history project, “Century of Black Mormons”. Reeve serves as this database’s general editor and speaks of Elijah Able and Jane Manning James, Green Flake, Oscar Crosby, and many other enslaved and free African Americans, who were also Latter-day Saints.

Reeve outlines 19th and early 20th century events, the hierarchical racial construct in U.S culture, both the national and regional political context and the key players in the changing story of African Americans within Mormon history. The story begins in the 1830 and 1840s, where church leaders offer an all-inclusive, universalistic message to all races and nationalities but then alters and restricts African American membership by prohibiting priesthood membership and involvement in the church’s highest rituals. Dr. Reeve also describes the church’s 20th century return to its universalistic roots and its media campaigns in an effort to claim this diverse identity.

Reeve and Westwood discuss Religion of a Different Color: Race and the Mormon Struggle for Whiteness, which describes the highly charged 19th century American views on race; and how “polygamy practicing Mormons” were thought to be building a new and emerging “race”. At the same time, Latter-day Saints were also increasing their numbers through immigration which led them to be viewed as foreigners. This discussion offers insights into ideas regarding marginalized groups of people, those who hold political power, and why ethnicity and ideas of “whiteness,” played such an important role in 19th and early 20th century Utah and the nation; ideas that clearly and offensively still affect us today.

Bio: W. Paul Reeve Raised in Hurricane (Washington County) Utah, W. Paul Reeve has been teaching since 2008 American, Western, Mormon and Utah history at the University of Utah. Paul is the first-ever Simmons Professor of Mormon Studies at the U, and has written a number of books, including Making Space on the Western Frontier: Mormons, Miners, and Southern Paiutes (2007), Between Pulpit and Pew: The Supernatural World in Mormon History and Folklore (with Michael Scott Van Wagenen, 2011), and in 2015 Religion of a Different Color: Race and the Mormon Struggle for Whiteness (2015).

Century of Black Mormons is a digital history database designed to document and recover what was lost, the identities and voices of black Mormons during the faith’s first one hundred years (1830 – 1930).

Religion of a Different Color: Race and the Mormon Struggle for Whiteness

To purchase a copy of W. Paul Reeve’s latest book, go to Amazon to Religion of a Different Color: Race and the Mormon Struggle for Whiteness or gather up the book’s ISBN number (13: 9780199754076) and high tail-it to your local independent bookseller and order a copy there.

The African American Oral History Project took place in 1985, and was administered by the Charles Redd Center for Western Studies.