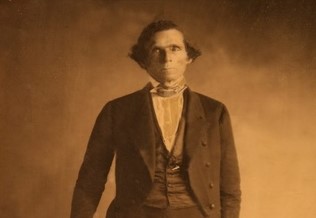 Drawing on decades of research and analysis, Dr. Bruce Van Orden offers the “life and times” of Willam Wines Phelps (1792-1872), one of the LDS Church’s and early Utah’s most influential figures. In this fast paced interview Van Orden weaves a myriad of new details and insights regarding a man who worked “shoulder to shoulder” with LDS Church founder Joseph Smith, and justifiably could be described as a fellow creator of early Mormonism. Phelps was an intellect, chronicler, journalist, master printer (he brought the first printing press to Utah), doctrinal provocateur and a political strategist (he was the ghost writer for Smith’s 1844 U.S. Presidential platforms and publications). Besides all of this, he was a lawyer, a poet, a hymnographer–with 15 hymns in the current LDS hymnal–and was Utah’s first official weatherman/meteorologist.

Phelps’ life story serves as something of a “hinge,” between pre-Utah Mormonism under Joseph Smith, and the more pragmatic and geographically expansive church under Brigham Young. Readers and listeners will gain a deeper understanding of the religious devotions, the bold political worldviews and the millennial “fire in the bones” convictions that permeated early Anglo-American Utah. A state of mind that, in less than a decade, would come in conflict with a much stronger and more determined United States.

As a longstanding member of the Council of Fifty, and as first Speaker of the House in the Provisional State of Deseret (two sessions), Phelps contributed much of the written political thought encountered in early Utah, including the 1849-50 statehood application under a banner of “Deseret,” which name Van Orden believes was suggested by Phelps. Van Orden speaks of Phelps’ interactions with Brigham Young, his vision for an educational system for Utah (including the creation of the University of Deseret), his ouster from the Deseret News by editor Albert Carrington, his contributions to the creation of the Deseret Alphabet, and his long standing role as the serpent in the church’s endowment ceremony.

Guest Bio: Dr. Bruce Van Orden is an emeritus professor of Church History and Doctrine at Brigham Young University. He received his Ph.D., M.A and undergraduate degree from BYU. He has been a member of the LDS Church’s Curriculum Committee and has authored many articles and books on LDS History, including Prisoner for Conscience’ Sake: The Life of George Reynolds, as well as this biography of Phelps. Shortly after retiring, Van Orden and his wife spent seven years as LDS Church ministers to inmates at the Utah State Penitentiary in Draper.

We’ll Sing and We’ll Shout: The Life and Times of W.W Phelps  — to buy a copy click here, we also recommend that you contact your local independent book dealer.