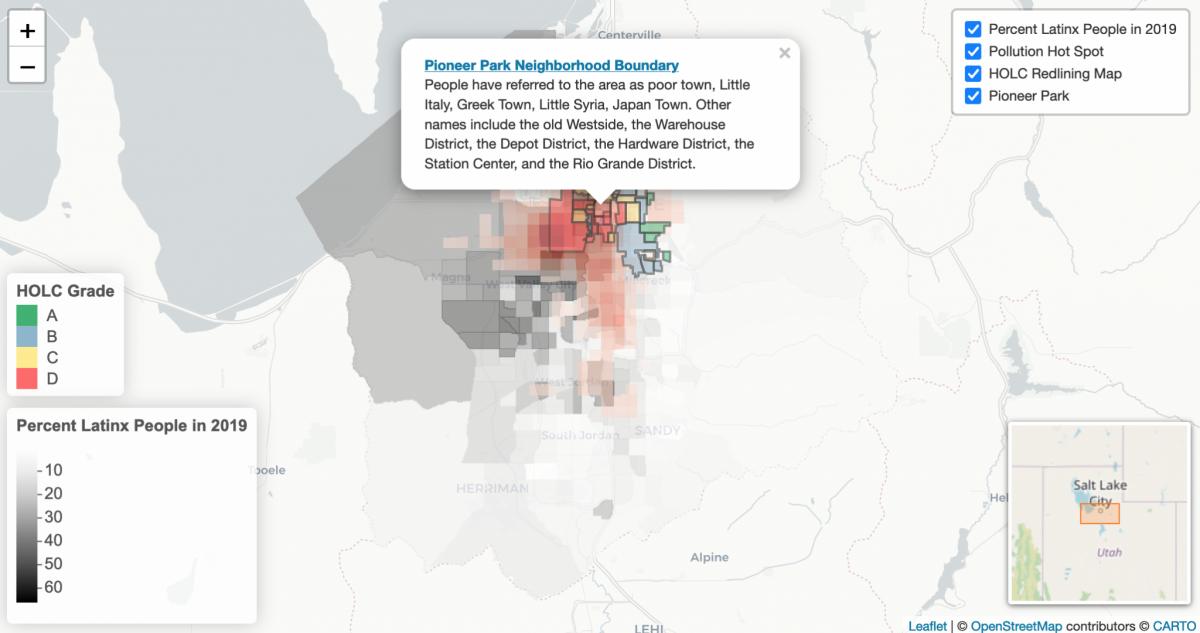 Date: September 20, 2021 (Season 3, Episode 11; 49:26 minutes long). Click here for the BuzzSprout version of this Speak Your Piece episode. The above image is a screenshot of USU’s spatially layered interactive map of Salt Lake City which demonstrates the overlap between pollution hotspots, Latinx Populations and mid-century mortgage redlining boundaries. Are you interested in other episodes of Speak Your Piece? Click here for more episodes.

This podcast is all about how examining the past (history) along with geographical and public health data (science) can help a community like Salt Lake City see evidence concerning contemporary health and social problems, how such evidence can play a part in solving these problems, and point municipal and community leaders towards better city and development practices.

“Scholars have found that race is the most significant predictor of environmental pollution exposure…Crowder and Downey (2010) [and they have] found that Black and Latinx households experience higher levels of proximate industrial pollution compared to White households.” This is an excerpt from the capstone project written by Emma Jones. Jones and Shcheglovitova anticipate their research to be used in further investigations regarding spatial patterns and terrestrial pollution in Salt Lake City. Their research connects the study of spatial distribution of terrestrial pollution to both historic and present-day planning practices which they believe perpetuate housing segregation and disinvestment in communities of color.

Bottom line: Jones and Shcheglovitova documents the existence of environmental racism in SLC. Their identification of spatial patterns led them to create an interactive map accessible in Salt Lake West Side Stories — post 35 (see within a link to Jones’ complete paper).

Bio: Emma Nathel Jones has a Bachelors of Science in Conservation and Restoration Ecology with an emphasis in GIS and a minor in Landscape Architecture. During their time at Utah State they worked on a variety of undergraduate research projects concerning sustainable energy development and sustainable agriculture as a part of the Undergraduate Research Fellowship. They are currently pursuing a Masters in City and Metropolitan Planning at the University of Utah.

Bio: Dr. Mariya Shcheglovitova is a human geographer with interests that span environmental and social justice, urban political ecology, cultural geography, and environmental history. She completed her PhD at the University of Maryland, Baltimore County where she worked on a project investigating present-day and historic intersections of street tree planting programs, waste management, and housing segregation. Her current position is in the Department of Environment and Society at Utah State University where she continues to explore the environmental and social justice implications of historic and contemporary policies that aim to manage land, bodies, and resources.