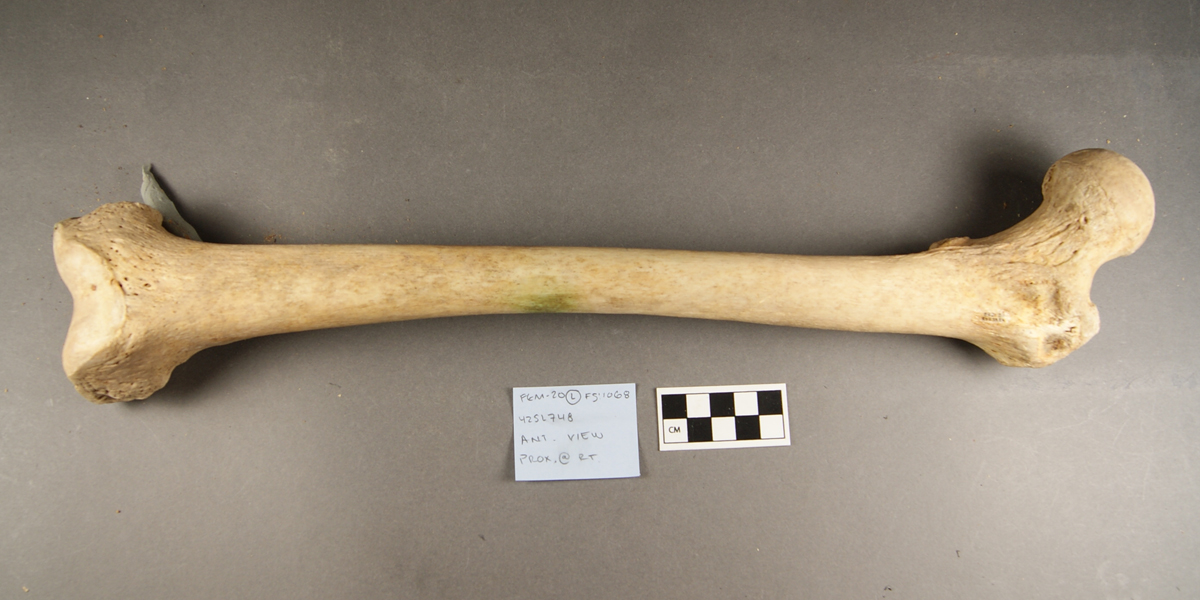 This is a hand of a laborer: That’s visible from the bones. Two fingertips on this left hand are missing, and the palm bones are badly fused together.

Nearly 100 years after they were likely buried and then forgotten, these bones tell of a man who continued working even after suffering a crushing fracture to the metacarpals of his palm.

As part of her investigation, Kopp found markings carved into the skeletal remains that matched procedures detailed in earlymedical textbooks. “Every skeleton I look at, I learn something new,” Kopp says. “The bones, they just floored me. I could see these people through the life of their bones.”

The skeletal remains are believed to be cadavers from the early days of the U.’s medical school, found during renovations of the George Thomas Park Building. The building once housed the  medical school, later the campus library, then the on-campus natural history museum, and now the remodeled Crocker Science Center.

Information about Utah’s earliest body donors was feared lost forever. Since then, based on a coincidental phone call that led to a “lucky and rare” historical connection, Kopp has been digging through decades of Salt Lake County vital records. As she searches death certificates, she’s finding more evidence to layer on top of what she’s observed in the bones.

Uncovering a 19th-century skeletal collection is extremely rare. This collection, the only one to have been unearthed in Utah, is especially significant because of its link to the state’s early medical training, says Dr. Christopher Merritt, state historic preservation officer.

In the early months of 2017, Kopp analyzed those skeletal remains, most crushed through excavation or mixed together.Se was able to match femurs — upper thigh bones — for some 11 bodies.

Out of respect, Kopp doesn’t talk about most of the American Indian and Alaskan Native remains she  investigates as the state government’s lead forensic archaeologist, following tradition as well as  legal protections.

“Prehistoric people buried their people everywhere and anywhere,” Kopp says. Whenever possible, those skeletal remains are returned to tribal leaders for reburial.

In her investigation of the U.’s anatomical skeletons, she can talk about evidence such as that mangled left hand. Details embedded in the bones helped Kopp determine that most had worked as laborers.

In a law passed in 1907, the Utah Legislature decreed that unclaimed bodies could be sent to the U. to be embalmed and used as cadavers. Body donation was considered taboo, and in those early years names were either lost or not recorded. (By the mid-1930s, cadavers were cremated in a campus facility after they had been used for medical training, and now cremains are buried at the Salt Lake City cemetery. Records were maintained from about 1969 on, says Kerry Peterson, head of the U.’s body donor program.)

Later, after Kopp finished her investigation, a man called her colleague Amy Barry, the state’s cemetery program manager, seeking the gravesite of his great-uncle. The man’s death certificate listed the University of Utah as the place of deposition. That was a crucial missing link —how donated bodies were designated on death records.

To learn more, Kopp began researching Salt Lake County vital records from 1907 to 1930. “I had a good story that I was able to tell from the remains,” she says. “They were probably all male, and age range [at death], I had that. But now — with the death certificates — I could maybe find out who these people were. And exactly what time frame they died.”

Over months of research, she’s compiled a list of 300 people whose bodies were donated to the university. Each year, a handful of those bodies were likely used as cadavers.

The vital records also contained information such as age, place of birth and occupation. A majority of donated bodies were listed as laborers, including miners and railroad workers, which helps to explain the injuries recorded in their bones. “We know the what and the when,” says Koop, outlining the bigger questions surrounding the cadaver collection. “We still don’t know the why. And we still don’t know the who.”

Maybe research will eventually unearth more information. Maybe more questions about the lives of the state’s earliest cadavers will be answered. Or maybe not. No matter what, Merritt says, these remains offer a snapshot  of the people who helped train the state’s first doctors, Merritt says,. “This is a “part of our history that is not often told in history books.”

MORE
To find out more about the excavation of the University of Utah’s cadavers, listen to this podcast series.