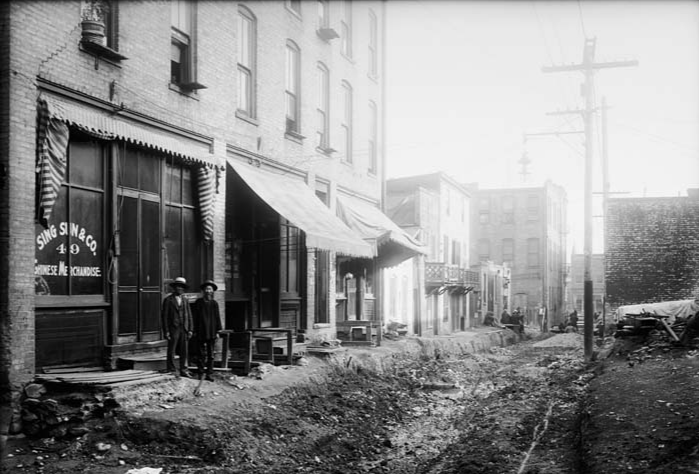 Date: March 7, 2022 (Season 4, Episode 7: 59 min. & 28 sec. long). Click Here for the BuzzSprout version of this Speak Your Piece episode. The above photo is of two Chinese American men standing in SLC’s Plum Alley, circa 1907. Plum Alley (between 1st & 2nd So. and Main & State Streets) is one of the immigrant neighborhoods mentioned in this episode. Photo by Shipler Commercial Photographers, courtesy of the Utah State Historical Society. Are you interested in other episodes of Speak Your Piece?  Click Here. This episode was co-produced by Brad Westwood and Chelsey Zamir, with help (sound engineering and postproduction editing) from Jason Powers from the Utah State Library Recording Studio.

This episode is an interview with Dr. Brandon Plewe, BYU geographer and cartographer, with SYP host Brad Westwood. It involves a discussion about Plewe’s 2022 Utah Historical Quarterly article entitled “Placing Immigrants in Salt Lake City, 1900,” Utah Historical Quarterly, (Winter, 2022: Vol. 90, No. 1), which explores the research discovered from mapping out data from the 1900 US Census on the distribution of immigrants in Salt Lake City.

Why use geography and cartography to tell this story?  Plewe describes that geography, particularly spatial data or mapping of locations, offer researchers entirely different ways of seeing and thinking about history. Geography, and by extension, cartography allows for the visualization of an historical narrative rooted in time and space. What is so interesting about using maps, Plewe continues, is that it’s a different lens of which to view the past. It presents patterns and beg questions that would have otherwise not been considered. In this case, Plewe and his Brigham Young University students mapped the exact addresses of those picked up in 1900 Census data. In mapping these addresses, they discovered a pattern of immigration across downtown Salt Lake City. In order to discover the larger picture that this data would tell, they examined the distribution of immigrants, the different countries they emigrated from, and where exactly in SLC they settled.

Dr. Plewe details what is going on in SLC during the 1900 Census in comparison to other US cities at this time. There was massive immigration happening across the USA at this time, specifically to regions in and around New York City, Chicago and Boston. Immigration to SLC wasn’t similar to the immigration happening in those parts of the country, but for the American West, immigration in SLC was pretty significant. with a relatively large and diverse population moving in, surprising even higher than in San Francisco at the time.

Utah in 1900 was in the throes of rapid demographic change. Before the 1900s, immigrants to Utah and SLC were largely part of a religious gathering spurred on by the Church of Jesus Christ of Latter-day Saints. In the post-1900 era Utah experienced a wave of immigration inspired more so by expanding industrial and capitalist forces. Plewe found that non-English speaking and Irish immigrants mainly lived in multi-family blocks, boarding houses, and tenements which were generally more affordable. Chinatown including Plum Alley were areas of inexpensive high-density housing for Chinese but also Japanese immigrants. Others worked on the railroads and lived near the train tracks in the southwest and southern part of downtown.

Location of all residents enumerated in the 1900 census that could be located by address. Photo courtesy of Plewe, “Placing Immigrants in Salt Lake City, 1900,” pg. 61.

This geographical data renders an otherwise undetected picture that shows Mormons were seen through a racial lens. This research fits into that which was pioneered by Dr. Paul Reeve – Mormons, at this time, were seen as different from other Americans. The Mormon Church was successful in bringing many immigrants from Great Britain, Western Europe and Scandinavia, and assimilating them into Utah’s existing dominant culture. Less effective (or taking longer) were their attempts to assimilate immigrants from Italy, Spain, Ireland, Poland, etc., into Utah society. The latter group of immigrants were considered “less white,” and Mormons too, at this time, were viewed by many Americans as “less American.” Obsessed with their national image, the members of the Church of Jesus Christ of Latter-day Saints aspired to be seen as equally American and concurrently predominantly white. Unknowingly or at times knowingly, SLC society segregated certain “less white” groups to specific areas, so as to differentiate themselves from these communities. Immigrant populations also self-segregated due to cultural comforts and economic reasons – they wanted to be in areas where others spoke their language, understood their culture. Altogether these communities concentrated in the southwest and south side of SLC, where these new immigrants also found work in less attractive, labor intensive, industries such as railroads, manufacturing, warehousing, etc.

There were deficiencies in this research, however, as Plewe points out, since collecting census information was normally conducted by someone who went door-to-door. There were instances where census workers would get lazy about exact addresses, or would quit gathering information entirely due to language barriers or cultural biases. Such instances could be seen in the city’s industrial areas and in the Poplar Grove and Glendale neighborhoods, directly across the Jordan River from SLC original west side.

One other obstacle was that addresses have changed in SLC. As Plewe describes, streets have changed so drastically that only about 10% of streets today have the same numbers or names from the 1900 Census. One can’t simply geocode historical data for a city that doesn’t exist anymore so noting particular neighborhoods and immigrant groups often became difficult to do from Census data alone.

Salt Lake City street map, 1900. Streets with the same name and addressing in 2020 are shown in black; those that have changed are white. Photo courtesy of Plewe, “Placing Immigrants in Salt Lake City, 1900,” pg. 60.

Plewe concludes in this discussion that religion, race, economics, and the way each population of immigrants had different influences on SLC. As mentioned, these immigrants were influenced by their surroundings but also made a direct influence themselves.English, German, and Scandinavian immigrants primarily migrated for religious purposes and were actively assimilated into the culture and, therefore, spatially distributed. Whereas, non-English speaking and Irish immigrants emigrated not for religious purposes, but for economic and labor reasons and for cheaper housing, often densely populated in particular regions outside of the heart of downtown, as seen with Chinese immigrants in Plum Alley.

Bio: Dr. Brandon S. Plewe, an associate professor of geography at Brigham Young University (Provo), has been teaching there since 1997. Plewe is a committed trail preservationist and his research focuses on mapmaking and map uses related to Mormonism and the American West. To experience Plewe’s most recent mapping ideas go to #30DayMapChallenge on his Twitter feed.