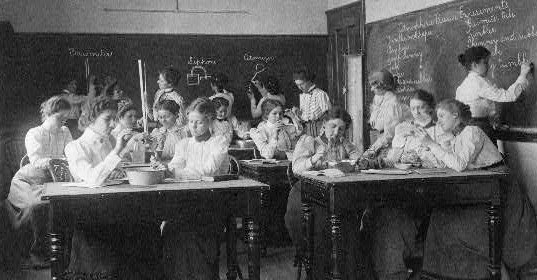 Date: February 27, 2022 (Season 4, Episode 6: 50 min. & 56 sec. long). Click Here for the BuzzSprout version of this Speak Your Piece episode. The above photograph is not of Utah women; but a group of students in a Washington, D.C., normal school, circa 1890-1900, performing atmospheric pressure experiments. There are some late 19th c. images of Utah women in scientific settings; alas however, they document mostly medical sciences or what would be described in the early 20th century as “domestic science,” to be rebranded in the mid 20th century as “home economics.” This photo was taken by Frances B. Johnston (1864-1952) and is used here courtesy of the Library of Congress. Are you interested in other episodes of Speak Your Piece? Click Here. This episode was co-produced by Brad Westwood, Chelsey Zamir, and Cassandra Clark, with help (sound engineering and postproduction editing) from Jason Powers from the Utah State Library Recording Studio.

This SYP episode is part of an ongoing series about women’s history in Utah. It involves a discussion about Dr. Christine Cooper-Rompato’s fantastic 2015 Utah Historical Quarterly article, entitled: “Women Inventors in Utah Territory” (Summer, 2015: Vol. 83, No. 3), which draws out the stories of five Utah women’s intellectual, scientific and technological contributions, during the late 19th century.

Dr. Cooper-Rompato sums up her article this way: “Despite the difficulties faced in patenting inventions, five women from nineteenth-century Utah were granted patents in their own name. This paper explores the inventions of these women, as well as what can be learned of their lives. It places their inventions in the context of similar contemporary intentions and discusses the heightened interest in women’s innovations in the 1880s and 1980s, as evinced by the popular press. Moreover, it argues that the Utah women’s inventions were not limited to the domestic realm; rather, they demonstrate the wider cultural and economic preoccupations of nineteenth-century Utah.”

“It is significant to note the variety of inventions created by these five women. They might have focused on the domestic sphere, but they were not limited by it.” (p. 215)

Dr. Cassandra Clark details in this discussion the many interesting and innovative ways women worked in 19th century Utah. Contrary to traditional beliefs, women weren’t only working within domestic environments. In actuality, women were continuously innovative and essential to their societies above and beyond the domestic sphere. The main argument of this article, as per Dr. Clark, is that while inventions were thought to be a masculine endeavor only, these five Utah women were inventing innovative products, some of which were influenced directly by Utah’s territory, that helped improve their lives (transportation, health, clothing, and mining, to name a few), both in and outside of the home.

The heart of this UHQ article explores the shift in Utah’s 19th century society to embrace urbanization and industrialization. Due to this shift, there’s a demand for inventions that allow for accessibility to new ways of life, whether that be in industry, entertainment, clothing or leisure. These inventions allowed both men and women to spend less time completing time-consuming tasks within the home, and more time participating in leisure and recreation outside the home. For instance, many Utahns during this time traveled to the Great Salt Lake to soak and sunbathe, new innovations by women enabled both the leisure and safety of partaking in such an activity.

Clark concludes in this discussion with SYP host Brad Westwood, sharing how the topic of inventions and patents set the groundwork for the professionalization of science and medicine in the 20th century. These inventions changed the way people interacted with one another and they connected people to public health and the environment in new ways not previously seen. By these inventions, these 19th century women were continuously influential and, quite frankly, essential to their societies which had a great impact on both history and our world today.

Bio: Dr. Christine Cooper-Rompato, who is the author of the article discussed here, is a professor of English and part of the Religious Studies Program at Utah State University (Logan, Utah). Cooper-Rompato research generally focuses on later medieval religious literature and culture.