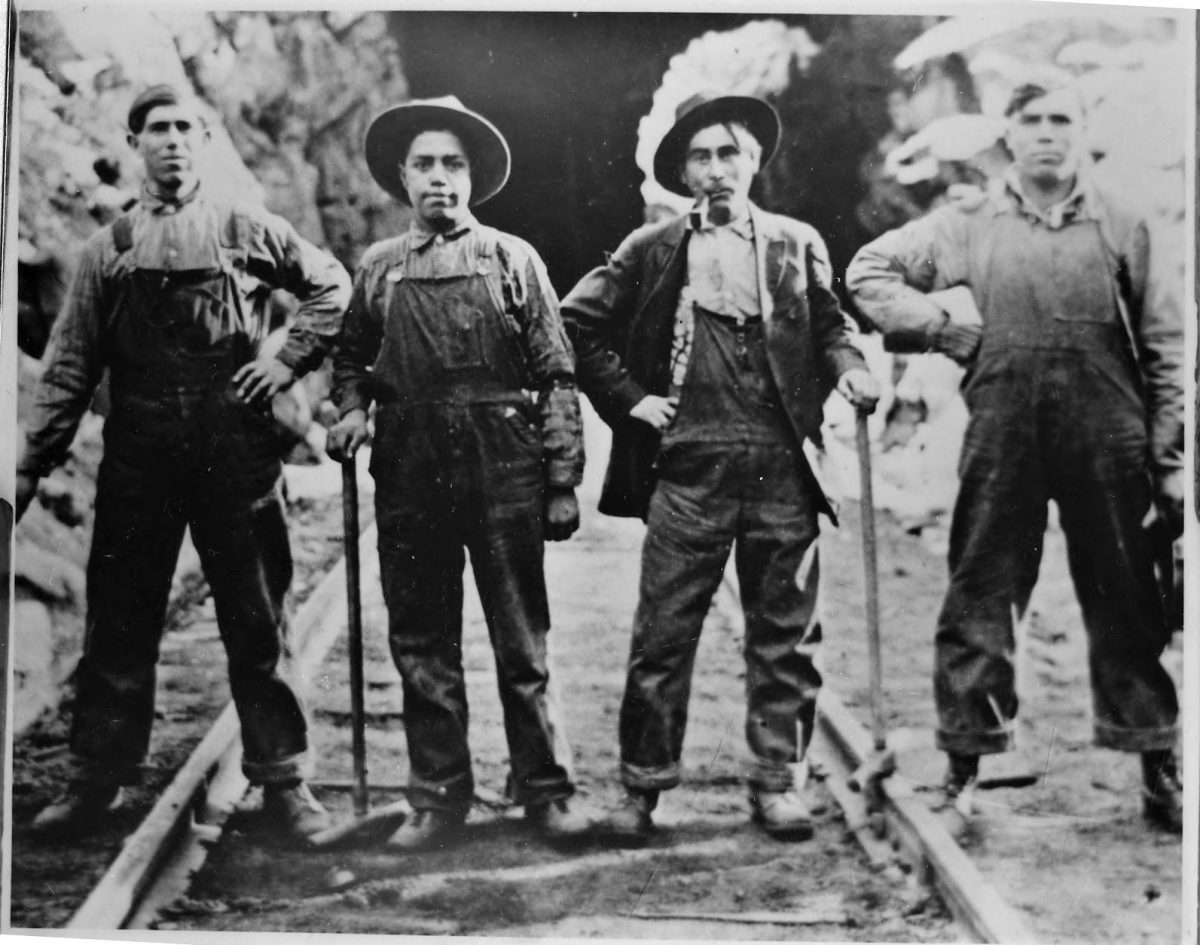 The image above is of four Mexican railroad workers, circa 1915-1920, presumably somewhere in Utah. Courtesy of the Helen Z. Papanikolas People of Utah (1976) Collection, Utah State Historical Society.

Latino/as who lived in twentieth-century Utah faced discrimination and unstable employment options that negatively affected their lives. However, their dedication to community-building and hard work helped them to establish themselves in Salt Lake’s west side and far beyond.

The 100% American nativist sentiments (a belief in protecting established inhabitants against immigrants), espoused by many white Utahns during World War I, continued into the era of the Great Depression. Many Americans embraced anti-immigrant agendas thinking that this would provide solutions to the country’s complex economic problems. Some unfortunate consequences of heightened nativist sentiments resulted in what became known as “repatriation drives” where government officials deported between 300,000 to 2 million Mexican Americans to Mexico, many of whom were longtime and legal American citizens.

While Utah’s exact number of deportees is not available, many of the state’s Latino/a population were forcibly removed and shipped to Mexico during the 1930s. Longtime Mexican Americans living in the Pioneer Park neighborhood recalled friends and family being apprehended inside Pioneer Park during the repatriation drives.

Less than a decade later, World War II production created a new demand for Latino/a labor. The 1942 Emergency Farm Labor Agreement welcomed Latino workers back to the fields and mines of the American West. Congress implemented the Bracero Program in 1942 and renewed it until 1964. The program provided seasonal work for Mexican laborers and even paid for transportation and housing in addition to a wage. For many “braceros,” American wages were seven to ten times higher than what they made in Mexico. Today, Latino employees are still critical to Utah’s mining, construction, agriculture, and building maintenance jobs while many others own their own businesses and contribute to Utah’s culture and economic enterprises in a myriad of ways.

Today, Latino employees are still critical to Utah’s mining, construction, agriculture, and building maintenance jobs while many others own their own businesses and contribute to Utah’s culture and economic enterprises in a myriad of ways.

Jobs in agriculture were and are still often filled by Latino/as who move to different jobs depending on the growing seasons. Latino/as who work in agriculture may move often, but they do see Utah as their home state. Since 1966, Salt Lake City’s Guadalupe Center has served many of SLC’s Latino/as by offering classes in English, opening a Charter school (K-6), a preschool, and other adult education programs.

The Guadalupe Parish also opened the La Morena Café in 1967 at 100 South 240 West, which served SL’s Hispanic population as an unofficial service center for incoming immigrants, and as a political founding place for Utah’s Latino civil rights movement. Based on the political efforts organized at the Guadalupe Center, Utah’s Migrant Council, Utah Rural Development Corporation, the Multi-Ethnic Housing Corporation (120 South 200 West), and the Centro de la Familia de Utah (525 South 300 West) were all organized on the west side to meet the needs of Utah’s Latino Communities.

In 2019, Latinos made up 15% of Utah’s population and at least 10% of Utahns speak Spanish. Thousands of multi-generational Latino families live in Utah and are a part of the state’s social fabric. Like all people who migrated to Utah since the 1840s, many Latinos made a life in Salt Lake’s west side. Their experiences add to Utah’s diversity despite the continued discrimination that most of them continue to face.  Regardless, it was because of the Pioneer Park neighborhood’s populations of people who migrated to Utah from across the United States and around the globe that Latinos and other immigrants found economic opportunities and housing options available in the west side.

We hope you join us for our next Salt Lake West Side Stories post where we will explore the amenities that Pioneer Park offered residents of Salt Lake City during the early and mid-twentieth century.

Related Activity: Take some time to browse the digital exhibit “We Remember, We Celebrate, We Believe: Latinos in Utah,” which was curated by Professor Armando Solorzano. Solorzano toured his exhibit in its original form between 2002 and 2016, to scores of Utah junior high schools and high schools, also to county fairs and coffee shops, all free of charge. In 2017 as the director of the Utah Division of State History, Brad Westwood arranged for it purchase and its digitization, so Solorzano’s could refer people to the on-line site, and take a well deserved rest.

Contributors: A special thanks to Charles (Chuck) Salazar and Jennifer Macias for contributing to the contents of this post. A profound gratitude to Lisa Nelson and the narrators at the Utah State Library’s Reading for the Blind Program for creating the audio for this post.

Vincent V. Mayer, et. al., Working Papers toward a History of the Spanish-speaking People of Utah: a report of research of the Mexican-American Documentation Project, American West Center, University of Utah, 1973, https://collections.lib.utah.edu/details?id=1396789&facet_setname_s=%22uum_awcrp%22&q=%28%28Night+AND+Club%29+AND+%28Salt+AND+Lake+AND+City%29%29+AND+%28dance%29