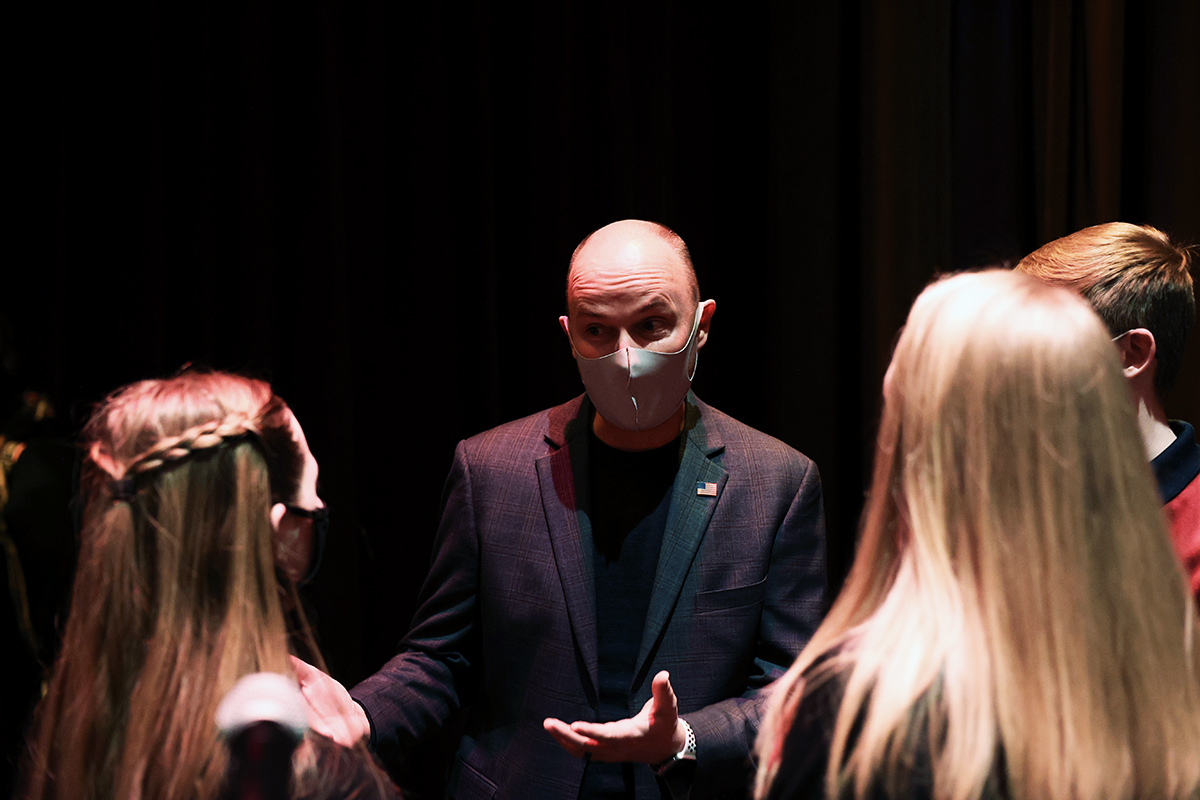 That was the best experience of my life, one Utah 9th-grader said after seeing a live performance of “Hamilton” on Saturday, Feb. 12.

She had earned her ticket by writing a letter to Gov. Spencer J. Cox and Lt. Gov. Deidre M. Henderson about how to improve Utah. She was one of 80 winning students from across Utah selected from the more than 350 entries in the Utah Department of Cultural & Community Engagement’s “One Utah: A ‘Revolutionary’ Contest.

Winning letters were selected by a panel from the Gov. Cox’s cabinet members and department staff. Student letters identified “revolutionary” solutions to state problems ranging from homelessness to air quality. Before the Saturday matinee and evening performances, six students were invited to read their entries at receptions hosted by Gov. Cox and Lt. Gov. Henderson, addressing pressing concerns such as bullying, inclusion, and mental health.

Gov. Cox, a super fan of the musical, recounted how playwright Lin-Manuel Miranda was inspired after reading Ron Chernow’s biography of Alexander Hamilton. Hamilton’s story reminded Miranda of rapper Tupac Shakur’s life. That’s how he began thinking of the country’s immigrant founders as hip-hop revolutionaries. “Immigrants, we get the job done,” from the song “Yorktown,” is one of the musical’s lyrics that always draws a reaction from the audience.

At the afternoon reception, one student told the story of her personal contemplation of suicide, and offered suggestions for strengthening mental health counseling among high school students. Another student called for improving the perceptions of the state’s foster families. At both receptions, organizers overheard students — from a variety of Utah communities and cultural backgrounds — sharing ideas about solutions that they could take back to their own schools. After the receptions, students expressed their gratitude that the state’s top elected officials had listened to their concerns.

At the evening reception, after hearing an essay about bullying, Lt. Gov. Henderson challenged students to notice classmates who need to be included, underscoring the power of helping people one by one.

“The kids were really moving,” said Jill Remington Love, director of the Utah Division of Cultural & Community Engagement, who launched the contest. “I think they really touched the Governor’s and Lieutenant Governor’s hearts.”