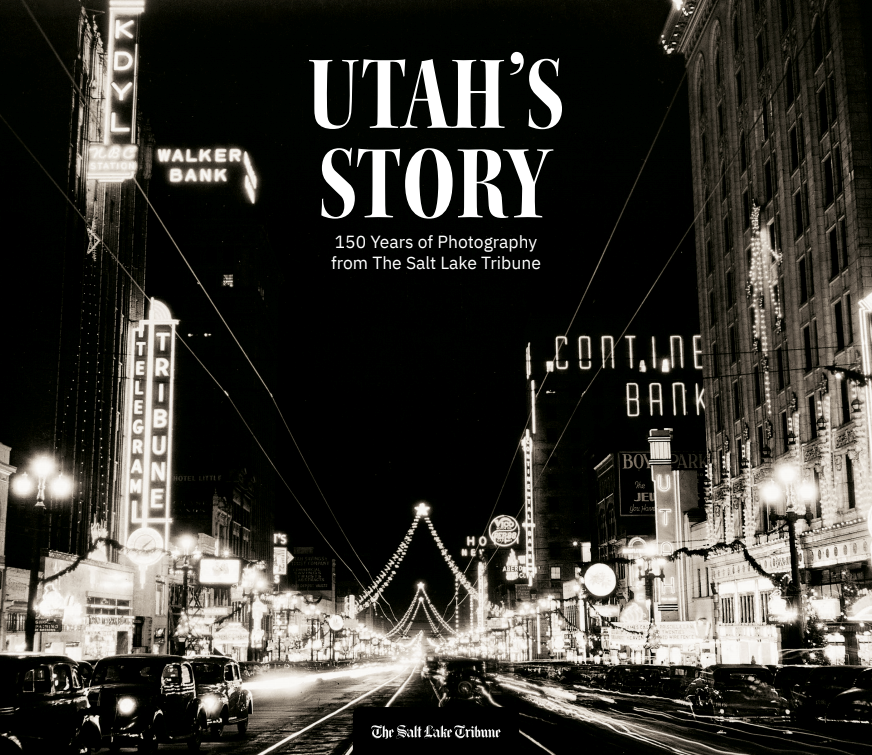 April 12, 2021 (Season 2, Episode 18: 53:46 minutes). Click here for the BuzzSprout version of this Speak Your Piece episode. Image above is the cover of Utah’s Story. Courtesy of the Salt Lake Tribune.

In celebration of the Salt Lake Tribune’s 150th anniversary (1870-2020) as continuous newspaper published in Salt Lake City the “Trib” published in 2020, Utah’s Story 150 Years of Photography from the Salt Lake Tribune, a collection of historical photographs and stories by Tribune photojournalists, taken from the 1890s to the present (photographs, actually a photomechanical reproduction of photographs, did not appeared in newsprint until the mid-1880s). See “Topics Discussed in Time” listed below.

Salt Lake Tribune’s senior reporter and project editor Matt Canham, and then director of photography Jeremy Harmon, who is now director of photography and visuals at The Tennessean and USA TODAY’s South Region, discusses both SYP staff picks and their own favorite images, from the hundreds of remarkable images published in Utah’s Story. Canham and Harmon also discuss the Tribune’s recent transition from profit to a not-for-profit newspaper entity (see “In historic shift…”)

The impactful and timeless images found in Utah’s Story 150 Years of Photography from the Salt Lake Tribune, cover a range of topics, events and communities, such as Utah’s own late 19th and early 20th centuries industrial revolution and urban expansion, to the 2002 Utah Winter Olympics, to the 1983 controlled flood down SLC’s State Street, to the 2020 social justice protests and the first half of the COVID-19 Pandemic.. Each photograph presented in this work was created by dedicated photojournalists intent on connecting and telling important current events to the SLC community and beyond.

Matt Canham is a senior reporter and project editor for the Salt Lake Tribune. Matt joined the agency in 2002 and has been with the Trib for 19 years. He has covered topics in politics and investigative projects with PBS Frontline. Matt was also a Washington Correspondent for 6 years, reporting on the federal government and Utah’s members of congress.

Jeremy Harmon was the director of photography at the Salt Lake Tribune for 13 years. As of spring 2021 Jeremy became director of photography and visuals for The Tennessean (Nashville) and USA TODAY’s South Region. Harmon was also a key contributor to the Salt Lake Tribune’s website “The Legacy of Joe Hill”. Jeremy has many interests which include the preservation and use of the Tribune’s immense photographic archives (both analogue and digital).

Utah’s Story 150 Years of Photography from the Salt Lake Tribune — to buy a copy click here.